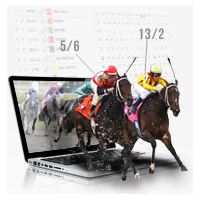 Whether you are under the famous Twin Spires of Churchill Downs, taking in the beautiful mountain backdrop of Santa Anita, or spending a summer day at the historic Spa at Saratoga Race Course, a day at the track is one of the best sporting events around. Here we have assembled a list of racetracks in North America, and around the world. Check 'em out!!

The horse racing scene is alive and well in the USA, with old crummy race tracks being torn down, and new, bigger and better tracks being built every few years. Broken down by state, every track you could ever hope to find information on is listed right here for your ultimate convenience.

The venues for one and only "Sport of Kings"

With a history that stretches back a thousand years, very few major sports today have the legacy of horse racing. While often referred to as ‘The Sport of Kings” (after all, English King Charles I awarded the very first racing cup in the UK at Newmarket in 1634) racing attracts fans from all facets of society, all of whom mix-and-mingle in the paddock and at the betting windows.

Few other sports provide the sense of tradition that horse racing does – think of the fancy hats and mint juleps at the Kentucky Derby, the bugler calling the horses to the track , the universal announcement “and DOWN the stretch they come!” – and you’ll know what we mean.

While attending other sporting events could cost hundreds of dollars for tickets, parking and concessions, most race track haves no or little admission, and often provide free parking. Most tracks offer the choice of sit-down restaurant-style dining – with restaurant seating often providing the best view of the track so you never miss the action – and even if you wager on the races, that doesn’t mean you have to mortgage the farm, with as little as $2 getting you in on the action for a race. And nowadays, many tracks also include casino facilities that provide additional entertainment options. And of course, simulcast wagering from tracks around the world.

From the world’s richest horse race, the $10 million Dubai World Cup, England’s legendary Epsom Derby, or the classic American race, the Kentucky Derby, all year around there are major horse races taking place somewhere in the world. For racing fans, this means there is no one season for their favorite sport, and no shortage of horse racing to enjoy.