The Fountain of Youth Stakes 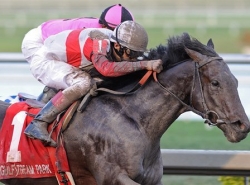 Considered a major prep race for the Florida Derby – and thus a step toward competing in the US Triple Crown of racing - the Fountain of Youth Stakes is held every year in late February at Gulfstream Park. First run in 1945, the Fountain of Youth is rated a Grade 2 event, and is open to horses aged three. It’s run at 1 1/16 miles on the dirt track, and presently carries a total purse of $400,000.

Over the years, the distance of the Fountain of Youth has been altered three different times, thus there are three different race record holders. At the current distance of 1 1/16 miles, the record time was set in 1978 at 1:41 by Sensitive Prince. The record for the 1 1/8 miles distance was set in 2008 at 1:48.87 by Eskendereya, and the record for the one mile distance was set in 2009 at 1:35.01 by Quality Road. Of these, both Eskendereya and Quality Road would suffer injuries that forced them to miss the Kentucky Derby, while Sensitive Prince would finish sixth, behind eventual Triple Crown winner Affirmed.

Over the 68-year history of the race, only once has a winner been disqualified, when Corinthian won in 2006 but was disqualified to third, with the victory awarded to First Samurai. Two jockeys, John Velazquez and the retired Jerry Bailey share the record of four wins apiece, with Bailey having the further distinction of having won in three different decades, hitting the wire first in 1980, 1998 and 2004, as well as 2005. Trainer D. Wayne Lukas has won three times, most significantly in 1995 with Thunder Gulch, who then went on to win two of three legs of the Triple Crown, taking the Kentucky Derby and Belmont Stakes.

There's nothing a handicapper with a Win ticket on a second-place runner likes to hear more than the phrase "hold all tickets" from the racetrack PA. That was the case in the 2015 Fountain of Youth, when an inquiry deemed that odds-on favorite Upstart was determined to have interfered with Itsaknockout in deep stretch, resulting in a reversal of the top two finishers. With that, the 5-1 Itsaknockout returned $12.80 for the Win. Meanwhile Frammento, the longest shot in the race at 63-1 just got his head into third, keying a big $321.30 trifecta, plus bonus cash back for wagers placed online through Bovada's racebook.

The 2016 edition of the Fountain of Youth Stakes (G1) featured a compact field but it included one of the brightest stars on the Triple Crown trail – the undefeated Mohaymen.

Purchased for $2.2 million, the strapping son of Tapit was coming into this race off of four consecutive victories, three of which came against graded stakes competition and was sent to post as the heavy favorite. Ridden confidently by Junior Alvarado, he rated off of the pace set by Awesome Banner and took command at the top of the stretch. He opened up a one-length advantage and drew clear to win by 2 ¼ lengths. Despite behaving greenly in the post parade, Zulu was second, well-clear of the next rival.

Mohaymen’s next step is the Florida Derby (G1) where he will face the undefeated Breeders’ Cup Juvenile (G1) winner Nyquist.

Check back closer to the race for the contenders for the 2017 Fountain of Youth Stakes!