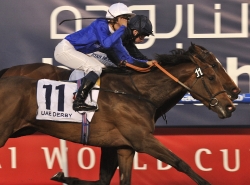 The UAE Derby is a Group 2 stakes that takes place in the United Arab Emirates city of Dubai, run at a distance of 1 3/16 miles on the new dirt track at the Meydan Racecourse. Formerly, the track was made of tapeta, an artificial mix that consists of rubber, wax, fibers and sand. This competition is for three-year-old thoroughbreds and offers a heavy purse of $2,000,000 USD, making it among the richest races in the world.

The first UAE Derby was run at the turn of the century and quickly earned status as a Group 2 international race two years later. During the brief history of this race, the distance has changed from its initial distance of about 1 1/8 miles to 1 1/4 miles in 2004 before changing back to its first length. The current race length of 1 3/16 miles was determined in 2010. As part of the Dubai World Cup Night, the UAE Derby usually takes place on the last Saturday of March. [+]

In 2013, the UAE Derby was awarded status as a significant part of the run up to the Kentucky Derby. As a result, it's currently one of the most important events in the Road to the Kentucky Derby series as one of the first races of the second leg of the competition, which offers the most points and the biggest purses. In addition to the large purse, the winner earns 100 points in the standings, while second place earns 40 points, third place takes 20 points and fourth place collects 10 points. The UAE Derby currently offers the biggest purse of all the Road to the Kentucky Derby races.

The brief history of the UAE Derby has been dominated by the Godolphin Racing group, which has won almost half of all the races since the inauguration of this event, including the first three races. Trainer Saeed bin Suroor was involved in all of those wins. Jockeys Frankie Dettori and Weichong Marwing have both won the UAE Derby twice. The record time at the original distance of 1 1/8 miles was set by Express Tour with a time of 1:47.04 while the speed record for the current distance of 1 3/16 miles was set in 2010 at the time of 1:57.44.

The 2016 edition of the UAE Derby (G2) attracted a truly international field of seven all with their sights set on stamping their ticket to the Kentucky Derby (G1) on the first Saturday in May.

Lani, bred in the United States and a gray son of top sire Tapit, had been racing exclusively in Japan prior to his start in Meydan. Despite a wide trip, he rallied to catch the favored Polar River, the lone filly in the race, to win by half a length. Polar River had been undefeated from four starts and ran gamely despite a troubled trip. Lani will ship to the United States and prepare for his next start which will be in the Kentucky Derby (G1) as he will try to become the first Japanese-based horse to win the race.