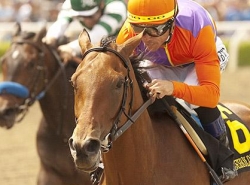 The Santa Anita Oaks is the sister race to the Santa Anita Derby (G1) and offers three-year-old fillies a key prep race towards the Kentucky Oaks (G1). Held in early April at Santa Anita Park in Arcadia, California, the Grade 1 race offers a purse of $400,000 and has routinely attracted the very best fillies on the West Coast.  Many fillies have used the Santa Anita Oaks as a major stepping stone towards award-winning seasons.

Since the inaugural running in 1935, the Santa Anita Oaks has undergone several name changes and makeovers. Run at distances from three-furlongs to a mile and a sixteenth over the years, the race settled in as the Santa Anita Oaks in 1986 after previously being held as the Santa Susana. The race was awarded Grade 1 status in 1979 and has maintained that since then. While Santa Anita did switch to a synthetic surface for several years, the track is back on conventional dirt. [+]

Winning Colors was not the only super-filly to come out of the D. Wayne Lukas barn. In 1995, Serena’s Song came into the Santa Anita Oaks with three-race win streak under her belt. After she delivered as the heavy favorite, she shipped to Turfway Park to compete against the males in the Jim Beam (G2). She went straight to the lead and left her rivals in her wake. Though she was sixteenth in the Kentucky Derby (G1), she defeated male rivals again that year in the Haskell Invitational (G1) and was named champion three-year-old filly.

Reading through a list of Santa Anita Oaks winners is like looking through a who’s who list of the best sophomore fillies throughout Thoroughbred racing history. While Winning Colors is the lone filly that won the Santa Anita Oaks and then the Kentucky Derby, Rags to Riches made an equally historic path in 2007. After a dominant win in the Santa Anita Oaks, she romped in the Kentucky Oaks (G1) over a strong field. She took on the males next time in the Belmont Stakes (G1) and defeated champion Curlin in a stirring stretch battle to become the first filly in over a century to win the Belmont.

At odds of 7-1, Wild At Heart wasn't the favorite to win the 2015 Santa Anita Oaks, but the Richard Mandella-trained colt did his best to make a race of it, stalking the pace set by 7-2 Luminance thrugh most of the race, until the inevitable happened and both were passed by heavily favored Stellar Wind in the stretch. Still, Wild At Heart held for third, and provided the bottom part of a $64.40 $2 trifecta payout. Make your exotic bets with Bovada racebook, and receive daily cash back on top of winnings up to 5%.

Perhaps the only real question as the field left the gate in the 2016 Santa Anita Oaks was whether the overwhelming 1-9 favorite Songbird would have any problems over an unexpectedly sloppy Santa Anita dirt track. From the moment the field broke, however, it was clear the answer to that question would be "no", as the undefeated 2015 Eclipse Award and Breeders' Cup Juvenile Fillies winner showed early sped to get the lead going onto the first turn, and from there simply cruised around the track to the wire, opening up by as much as five lengths on the field before settling for a 3 1/2 length win. Credit should be given to the connections Forever Darling, the only horse in the field of six that tried to make a race of it, eventually sacrificing any chance to hit the exotics after being passed late by Mokat and She's A Warrior.

Check back closer to race day for the 2017 Santa Anita Oaks contenders!