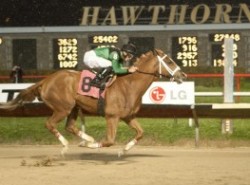 Held in late November, the Hawthorne Gold Cup is one of the last graded-stakes opportunities for older dirt horses in the United States each year. A $250,000 Grade 2 event run at the classic distance of a mile and a quarter, the Hawthorne Gold Cup annually draws top-notch competition and is the marquee event of the year at Hawthorne Race Course in Stickney, IL. The race was inaugurated in 1928 and has been held consecutively since 1946 at various distances.

Each year, the winner of the Hawthorne Gold Cup earns a solid gold trophy. No horse has recorded multiple wins of the race since Cryptoclearance won back to back runnings in 1987 and 1988 – the later by a record-breaking ten lengths. Since 2000, only Michael Maker has trained multiple winners of the Gold Cup with Freefourinternet in 2004 and Headache in 2011. While the Hawthorne Gold Cup is no longer considered a premier race for older horses, it occupies a specific niche at the end of the racing season while attracting talented fields and offering good betting opportunities.

In the midst of a nice string of runs, 6-1 Red Rifle went to the lead in the 2014 Hawthorne and played-catch-me-if-you-can with the field. None could, and the Giant's Causeway colt claimed his first graded-stakes win. More importantly for horseplayers with bets made online through the Bovada racebook, the wide-open race produced a huge return of more than $1300 on the trifecta.

Despite a pair of also-ran finishes leading up to the 2015 Hawthorne, last year's Belmont Stakes runner-up Commissioner went off in the as the heavy favorite in the race, and didn't disappoint his backers. After a clean break under jockey Flroent Geroux, the A.P. Indy colt settled into a perfect stalking position three wide just 2 1/2 lengths off second choice Majestic Harbour before being put down to a drive entering the stretch. He managed to get to the front with a furlong to run, and from there pulled away to a comfortable 2 1/2 length victory. The 6-1 Neck 'n Neck ran well to get up for third, with Majestic Harbor at 3-1 rounding out the trifecta.

Check back before race day for the 2016 Hawthorne Gold Cup contenders!