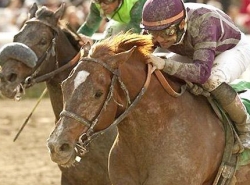 The San Felipe Stakes, held annually in mid-March at Santa Anita, is a Grade 2 stakes for three year-olds and an official Kentucky Derby prep race.  Run at a mile and one sixteenth on dirt, the San Felipe currently offers a purse of $400,000 and awards Kentucky Derby qualifying points to the first through fourth place finishers on a 50-20-10-5 scale.  The race was inaugurated in 1935, and has been run without interruption since 1945.  The current distance of the San Felipe has remained unchanged since 1952.  Past winners of the San Felipe include some of Thoroughbred racing’s all-time greats such as Affirmed, Sunday Silence, Bertrando, Free House, and Point Given.

The San Felipe added to its rich history in 2014 when California Chrome used the race as a springboard to wins in the Grade 1 Santa Anita Derby and Grade 1 Kentucky Derby, making him one of only four colts to achieve this rare hat trick, joining Sunday Silence in 1989, Affirmed in 1978, and Determine in 1954.  The only other San Felipe winner to win the Kentucky Derby was Fusaichi Pegasus in 2000.  Point Given, winner of the 2001 San Felipe, was the 9/5 favorite in the Kentucky Derby, but finished fifth before going on to win the Preakness, Belmont, and Travers Stakes.  Only  Man o’ War, Whirlaway, Native Dancer, and Damascus have accomplished this impressive trio of wins.   [+]

Other recent San Felipe winners of note include Pioneerof the Nile (2009), and Medaglia d’ Oro (2002).  Pioneerof the Nile appeared to make a winning move in the 2009 Kentucky Derby over a muddy track, but had to settle for second after being out-finished by long-shot winner Mine That Bird.  Medaglia d’Oro went on to win the Jim Dandy and Travers Stakes at Saratoga.

Consolidator posted the fastest San Felipe victory in the race's history at a mile and one sixteenth, stopping the timer in 1:40.11 in 2005.  Hall of Fame jockey Chris McCarron won the San Felipe a record seven times – the last in 1998 aboard Artax, an eventual Breeders’ Cup Sprint winner. Trainers Bob Baffert and Charlie Whittingham are currently tied for most San Felipe wins with four apiece – a record Baffert seems likely to take sole possession of given the usual strength of three year-old colts in his stable.  All four of Baffert’s wins have come since 1999 – the same year Whittingham died.

With only a minor stakes score on his resume going into the 2015 San Felipe, Bolo was mostly overlooked at the betting windows, going off at odds of 11-1. But the Kentucky-bred son of Temple City fought on long enough to get on the ticket, finishing third, and helping to boost the $2 trifecta payout to $92.20. Once you've handicapped a race and found your top three contenders, betting through Bovada racebook is fast, easy and secure.

The 2016 edition of the San Felipe Stakes (G2) drew a compact but competitive field of six. Mo Spirit, who appeared to be in good form after attracting headlines for a snafu during a morning workout weeks earlier, went to post as the favorite.

Danzing Candy, piloted by Mike Smith, was making his graded stakes debut after breaking his maiden and winning an allowance race. He flashed sharp early speed and led the way through moderate early fractions. He kicked clear by 1 ½ lengths in the stretch and gamely dug in to hold off a late charge by Mor Spirit to win by two-lengths. The undefeated California-bred, Smokey Image, finished fifth with no real impact.

Next for both Danzing Candy and Mor Spirit will likely be the Santa Anita Derby (G1) as they continue on the road to the Kentucky Derby (G1).

Check back closer to the race for the contenders for the 2017 San Felipe Stakes!