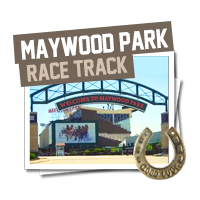 Located just outside of Chicago, Illinois, and built in 1946, Maywood Park was built on what was originally the home of the Cook County Fairgrounds, which offered non-wagering harness racing in the early 1930s. Maywood Park was so famous, it was featured on the “Tonight Show” in 1957.

Maywood Park is known as one of the fastest and safest hal-mile harness tracks in the country, and has been the scene of numerous world record race times.

Maywood Park has been around for some time now and back when it started, the area was largely wooded. Today, it sites right by one of the busiest airports in the nation. Even during the Great Depression, harness horse racing action was going down at Maywood Park. The first official horse racing license in Illinois was not issued until 1946 - just after WWII - and it was issued to Maywood Park. During the 1960s, Maywood Park rose as a premier half-mile standard bred racetrack in North America. Sadly Mr. Galt, Maywood Park's owner, passed away in 1968 at the age of 93.

During the 1970s Maywood Park went under some construction efforts to evolve the race track - including new barns, stalls and blacksmith shops. The Maywood Park was the first Chicago based horse racing betting track to host the prestigious Breeders Crown event.