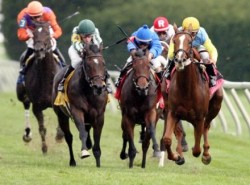 The Queen Elizabeth II Challenge Cup Stakes, commonly referred to as the QE II, is a Grade 1 turf race at a mile and an eighth at Keeneland for three year-old fillies. Run in October, the QE II is worth $400,000 and automatically qualifies the winner for the Breeder’s Cup Filly & Mare Turf. The race has been run consecutively since 1984 with the inaugural event featuring a visit and trophy presentation from its namesake, Queen Elizabeth, a long-time breeding and racing enthusiast who was visiting central Kentucky’s famed Bluegrass region at the time.

Trainer John Veitch is the only three-time winner of the QE II, with victories in 1987 (Graceful Darby), 1988 (Love You by Heart), and 1990 (Plenty of Grace). No jockey or owner has won more than two editions of the QE II. Originally run on dirt at a mile and a sixteenth, the race was switched to the turf course in 1985 and run at the same distance. It wasn’t until 1990 that the race was run at its current distance and subsequently became a Grade I event.

Dead heats are always an exciting part of racing, and in the 2014 QE II Cup, 8-1 Sistas Stroll and 8-1 Personal Diary were so evenly matched both in the odds and on the track, they finished in a tie for third place. When that happens, things get interesting with the exotic bets, as trifectas and supafectas pay out for both results. If you were to box your tickets with both horses on the bottom, you collect twice, plus a 5% bonus when you placed the bet online through Bovada's racebook. It's a win-win and win situation!

The 2015 edition of the Queen Elizabeth II Challenge Cup Stakes (G1) drew an accomplished and competitive field of three-year-old fillies with Sentiero Italia touted as the heavy favorite as the field went to the gate.

Her Emmynency, fresh off of a runner-up effort in the Del Mar Oaks (G1), was overlooked at odds of 19-1 and contested the lead with longshot Mizz Money. She put away that rival as they approached the top of the stretch and opened up a clear advantage. Jockey Florent Geroux allowed her to duck in slightly in the stretch, causing the Miss Temple City to alter course as she was launching a bold rally. Her Emmynency dug in and prevailed by a head over Miss Temple City with the favored Sentiero Italia a non-threatening third.

Check back closer to the race for the contenders for the 2016 Queen Elizabeth II Challenge Cup Stakes!