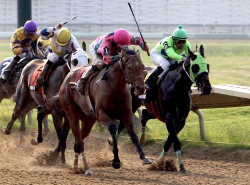 The Ohio Derby is the highlight of Thistledown’s racing season and is held annually in June. The race boasts a rich history dating back to the inaugural running in 1876, though there have been some bumps along the way. The race was cancelled in 1883 but returned to the landscape in 1924. In the 1970s, the race held Grade 2 status and was downgraded to a Grade 3 in 2010.

Since 2014, the race has not held graded status but does offer a purse of $500,000. The other notable change that race has undergone has been the distance – up until 2011, the race was contested at a mile and an eighth but was then shortened to a mile and a sixteenth. For 2016, the distance has been reverted back to a mile and an eighth. Despite an tumultuous past, the Ohio Derby has been the sight of some great champions including Hall of Fame inductee Skip Away.

For the second consecutive year, the Ohio Derby drew a wide open field and was ripe for some value. After East Hall pulled the upset at 9-1 in 2014, it was Mr. Z’s turn, this time at odds of nearly 7-1. Mr. Z finished in a thrilling photo finish, a head in front of Tencendur at 7-2 and the slight favorite, Divining Rod. The trifecta returned $260.60, a payout that could have been inflated further through Bovada Racebook’s 3% win or lose rebates on all straight. wagers and 5% back on exotics.

The field has been set for the 2016 edition of the Ohio Derby and while the race may lack graded stakes status, there is no shortage of talented three-year-olds. There is a competitive and wide open field of nine colts and geldings.

Mo Tom, from the first crop of champion Uncle Mo, tops the group as the morning line favorite at odds of 5-2 for Tom Amoss. From eight starts, he has three victories but has been plagued by unlucky trips in his recent starts, most notably the Louisiana Derby (G2) and Kentucky Derby (G1). After facing criticism for several of his rides, jockey Corey Lanerie has been replaced by jockey Javier Castellano.

He will face opposition from the likes of Adventist, a lightly raced contender knocking on the door of a breakthrough win and Decorated Soldier, a live longshot for the dynamic duo of Todd Pletcher and John Velazquez.

Here is the field for the 2016 edition of the Ohio Derby along with morning line odds.