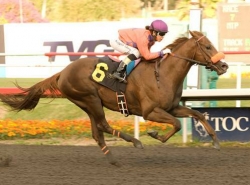 The Sham Stakes is a Grade 3 event for three year-olds held in early January at Santa Anita Park.  The one mile race on dirt is currently worth a purse of $100,000 and is part of the Kentucky Derby qualifying points system with ten points awarded to the winner, four to the runner-up, two to the third place finisher, and one to the fourth place finisher.  The Sham was inaugurated in 2001, and named for the great horse that had the misfortune of running second behind Secretariat in the 1973 Kentucky Derby, despite posting a record-breaking time in the losing effort.

Despite its newness, the Sham Stakes has produced such notable past winners as Bob and John (2006), Colonel John (2008), Tapizar (2011), and Goldencents (2013).  All four runners were among the best horses of their generation and well-regarded Kentucky Derby hopefuls.  Of this group, only Tapizar, who was sidelined with an injury, did not compete in the Kentucky Derby, but all four would go on to win at least one grade 1 race.  Tapizar won the 2012 Breeders’ Cup Dirt Mile, and Goldencents accomplished the same feat in consecutive years winning the 2013 and 2014 BC Dirt Mile to become the first two-time winner of that race.  Colonel John, a multiple grade 1 winner himself, used his Sham victory as a springboard to wins in the Santa Anita Derby and Travers Stakes.  Bob and John won the Grade 1 Wood Memorial at Aqueduct and was the post time favorite in the Belmont Stakes.    [+]

With the Sham Stakes now a well-established starting point for the three year-old campaign of West coast-based Triple Crown hopefuls, a Kentucky Derby winner will likely soon emerge from the race.  The Sham has been run at three different distances:  1 1/8 miles, 1 1/16 miles, and the current distance of one mile.  In 2009, The Pamplemousse set the track record for a mile and an eighth stopping the timer in 1:47.86 en route to becoming a serious Kentucky Derby contender.  Injury, however, would derail his Triple Crown bid.  Tapizar holds the mile and a sixteenth record of 1:40.38, and Out of Bounds is the mile speed record holder with his time of 1:34.56 in 2012.

Even though Rock Shandy hit the board in second place at odds of 21-1 in the 2015 Sham, the odds-on favorite Calculator running first didn't help with much of a exacta payout. But with 17-1 Pioneerof the West getting up for third, the $2 trifecta resulted in a huge $220.80 on a $2 bet. Use an online racebook such as our #1 partner, Bovada, to put tigether a winning exotic ticket, and get an additional 5% cash back on top of what the track odds pay, credited daily to your account

With all eyes on the Kentucky Derby, the 2016 running of the $100,000 Sham Stakes gave a preview of what some of the West Coast prep races has instore. Collected made his first start on dirt after two starts on turf and the Bob Baffert-trainee went off as the favorite in the wide-open field.

Under Martin Garcia, the son of sprinter City Zip flashed early speed before settling into a stalking position just off of the front-runners. He launched his bid a quarter mile from the finish and opened up a one-length advantage, ultimately winning by 1 ¼ lengths. His stablemate, Let’s Meet in Rio, rallied boldly from last to finish a fast-closing second and survived an inquiry after bumping I’malreadythere at the top of the stretch.

Check back closer to the race for the contenders for the 2017 Sham Stakes.