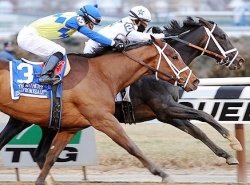 The Withers Stakes was inaugurated in 1874, making it one of the oldest races in the United States. This event has changed venues, starting at the Jerome Park Racetrack before moving to the Morris Park Racecourse, Jamaica Racetrack and Belmont Park before settling at the Aqueduct Racetrack. As a Grade 3 stakes with a purse of $250,000, this competition typically hosts strong competition. Thoroughbreds three years of age run on the inner dirt track at a distance of 1 1/16 miles. Over the past 140 years, the Withers Stakes has rarely missed a season, with the exceptions being 1911, 1912 and 2011.

The Road to the Kentucky Derby includes the Withers Stakes as part of the prep season before the first leg of the championship series. Winning this race results in 10 points in the overall standings while second place is worth 4 points, third earns 2 points and fourth place takes home a single point. This draws a significant amount of competition every year, including Samraat in 2014, who finished fifth in the overall standings and raced in the Kentucky Derby. A lengthy history, designation as a Grade 3 race and a quarter-million dollar purse also works to attract competitive horses. [+]

Until the most recent break in the running of the Withers Stakes in 2011, this competition was a one mile race, with the record speed set by Williamstown in 1993 at 1:32.40. The best finish for the new distance of 1 1/16 miles was set in 2012 by Alpha with a time of 1:44.23. The most dominant jockey of the Withers Stakes was Eddie Arcaro, winning a total of six times, including five wins between 1946 to 1955 and three consecutive victories from 1949 to 1951. Samraat's five race winning streak during 2013 and 2014 included a one length win at the Withers Stakes.

Somewhat overlooked as a second-time starter in a field with horses already pegged as Kentucky Derby contenders, Far From Over lived up to his name when he fought back from last-by-mile in the 2015 Withers to score at 6-1 to return $14.40 to Win and keying a $72 Daily Double. Horseplayers can make all their favorite wagers like straight wins, exotics, Pick-3s and Daily Doubles through online racebooks like Bovada, our long-time, highest-rated horse wagering platform.

With just a field of six sent to post for the 2016 Withers, the race unfolded without significant early pace, playing right into the hands of Sunny Ridge. Jockey Manuel Franco allowed the gelded son of Holy Bull to use his natural speed to track the pacesetting Vorticity through modest fractions. In the stretch Franco racheted up the pressure to earn a grinding three quarter-length victory over that rival. Sunny Ridge earned the ten Kentucky Derby qualifying points credited to the winner with the favored Flexibility running a disappointing fourth - a surprise considering his previous four-length win in the Grade 3 Jerome Stakes. Adventist, a dominant debut winner, finished a credible third.