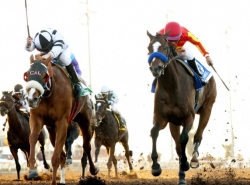 The Bayakoa Stakes is one of the final graded stakes of the year for fillies and mares and is held in December in California. Previously held at Hollywood Park until the track shuttered its doors in 2013, the race was held for the first time at Los Alamitos in 2014. The race is contested at a mile and a sixteenth and offers Grade 2 status and a purse of $200,000. Inaugurated in 1981, the race was originally named the Silver Belles Handicap and was renamed in 1994 to honor the champion mare Bayakoa.

Bayakoa was an Argentinian sensation who made her stateside debut in 1988 for trainer Ron McAnally. Though her first year of North American competition was average, she returned with a vengeance in 1989 and won nine of her eleven starts, traveling coast to coast and culminating with a victory in the Breeders’ Cup Distaff (G1). She returned in 1990 to win seven of her ten starts and ended the year with a bittersweet win over the ill-fated Go For Wand in the Breeders’ Cup Distaff (G1). She was inducted into the National Racing Museum Hall of Fame in 1998.   [+]

There have been many great fillies and mares to win the Bayakoa but one standout is another Argentinean star, Paseana. Trained by Ron McAnally who just years earlier had campaigned Bayakoa, Paseana quickly stepped into the spotlight vacated by her stablemate. The Bayakoa Stakes, then called the Silver Belles Handicap, was the first North American graded stakes win of her career and she unveiled herself as a force to be reckoned with in a 5 ½ length romp.

The most unique edition of the Bakayoa may have been the 1997 running. Sharp Cat, the brilliant sophomore filly trained by D. Wayne Lukas, had just lost the Breeders’ Cup Distaff (G1) as the favorite the month before. Aiming to end her season on a high note, she entered the Bayakoa. No other fillies entered to compete against her and she won, uncontested, in the first ever walkover in the history of Hollywood Park.

Although oh-so-close to a big upset over odds-on favorite Tiz Midnight in the 2014 Bayakoa, at 10-1 Warren's Veneda still overcame long odds to take second place, followed by 14-1 Legacy, to produce a $2 trifecta score of $122.20 - plus a 5% top-up in cash back paid out daily on a wager placed online with Bovada, our long-time, highest-rated racebook partner.

Run at Los Alamitos for the first time since its inception, the 2014 Bayakoa offered a different look and feel without losing any of its usual excitement. Despite just a field of six, the race produced a thrilling finish between top-class mares as Tiz Midnight and Warren’s Veneda threw down in the stretch, thrilling fans with a head-bobbing finish. Difficult to determine the winner with the naked eye, the photo revealed that Tiz Midnight was a head in front at the wire. It was the Bob Baffert-trainee’s first graded stakes win after finishing second in the Grade 1 Zenyatta three months earlier. A relative unknown coming into the Bayakoa, Warren’s Veneda went on to win three consecutive stakes races, including the Grade 1 Santa Margarita in March of 2015. Tiz Midnight was no match for Warren’s Veneda in their next start – the Pasadena Stakes – finishing a dull sixth behind her winning rival.

Check back closer to race day for the 2015 Bayakoa contenders!