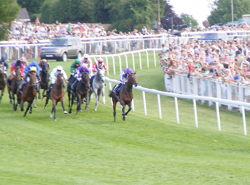 Mo Donegal is the favorite for the 2022 Belmont Stakes, to be held June 10 at Belmont Park in Elmont, New York. The famous 1 ½ mile contest has been reduced to 1 1/8 miles for the 2022 edition and will run for a purse of $1 million instead of $1.5 million. Although the race will be run without spectators or owners, it is still one of the legs of the American Triple Crown and will draw worldwide interest.

The Belmont Stakes odds were last updated on June 10, 2022. We'll post the markets from the top bookmakers, assisting players in ways to bet on Belmont Stakes online, as we have assessed a variety of the best online providers for US players.

For anyone who wants to place Belmont Stakes best bets, continue to read through our Belmont Stakes betting guide, as we'll provide expert advice from our in-house horse racing team. Stay tuned!

Favorites recently haven’t done well in the Belmont Stakes, with only three (Justify, American Pharoah, Afleet Alex) winning in the last 15 years. Favorites in the Belmont have won at a 42% clip overall 151 editions of the race, which is considerably better than the average 30% most races see. But in the last 10 years, favorites have only won twice, with the winning payouts and favorite finish position as follows:

The average winning payout over the last ten years is $21.79.

The Belmont Stakes began in 1868. It has been run at four different tracks over the years, but all were in New York. Three fillies have won the race, most recently Rags to Riches did it in 2007. Trainer Todd Pletcher has three wins to date and has two in this race with Dr Post and Farmington Road.

Tiz the Law will attempt to be the fourth New York-bred to win the state’s biggest race. There is a lot of history to buck; the most recent to do it was in 1882.

The Belmont Stakes card has a host of other major stakes, and the days leading up to the race are filled with stakes action. Thursday, June 18 is the $125,000 Critical Eye Handicap for fillies and mares going a mile. Friday, June 19 is the $80,000 Sir Cat Stakes for three-year-olds sprinting on the grass.

The June 20 card has six major stakes races. Leading up to the Belmont is the:

The Acorn Stakes is a one-mile contest for three-year-old fillies. The race has been won by the likes of Ruffian, Davona Dale, and in 2019 saw Guarana defeated Kentucky Oaks winner Serengeti Empress in a thriller.

This year, New York stakes winner Water White will take on the unbeaten star Gamine for Bob Baffert in the Acorn. Gamine is two for two after wins at Santa Anita and Oaklawn Park, while Water White took the Busher Invitational at Aqueduct on March 7. The Rudy Rodriguez trainee has not raced since but has had some stiff breezes over the Belmont track, including a four-furlong move in 48.66 on June 9.

Gamine was a $1.8 million auction purchase last May and has gone unbeaten in two tries for Michael Lund Petersen. The Into Mischief filly has been training at Belmont Park this week. She originally cost $220,000 as a yearling.

The rest of the Acorn field is completed with Casual, Lucrezia, Perfect Alibi, and Pleasant Orb. The latter is trained by Tiz the Law’s trainer Barclay Tagg.

See below the top racebooks where you can wager online and choose the best one for you. Do not forget to claim your welcome bonuses after signing-up.