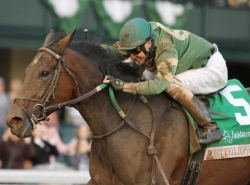 The Spinster Stakes is a Grade 1 race for fillies and mares held annually in early October at Keeneland Racecourse.  Inaugurated in 1956, the Spinster is a prestigious race that boasts many notable past winners.  Run at a mile and an eighth for a purse of $500,000, the Spinster is part of the Breeders’ Cup Challenge Series with the winner receiving an automatic bid to the Breeders’ Cup Distaff.  The Spinster has always been run on dirt with the exception of during Keeneland’s Polytrack era (2006-2013); the mile and an eighth distance of the race has remained unchanged throughout its history.

Past winners of the Spinster comprise an impressive list of racing’s top fillies and mares including: Azeri (2004), Take Charge Lady (2002 & 2003), Bayakoa (1989 & 1990), Princess Rooney (1984), Old Hat (1964), and Doubledogdare (1956).  The Spinster also has an established history of producing Breeders’ Cup winners beginning with Hall of Fame inductee, Princess Rooney, who won the inaugural Breeders’ Cup Distaff in 1984.  Champion Bayakoa became the first two-time winner of the BC Distaff after posting consecutive victories in the Spinster.  Royal Delta is the only other horse to win the Breeders’ Cup Distaff twice, equaling Bayakoa’s feat in 2011 and 2012.  Azeri, also a member of the National Racing Association’s Hall of Fame, won the 2004 Spinster en route to claiming the Breeders’ Cup Distaff.  Take Charge Lady never won a Breeders’ Cup race, but did go on to produce 2013 BC Classic runner-up Will Take Charge as a broodmare, and is the second dam of 2014 BC Juvenile Fillies champion Take Charge Brandi.  In 2014, heavily favored Close Hatches finished fourth in the Spinster to eventual BC Distaff runner-up Don’t Tell Sophia.    [+]

In total, only four horses have won the Spinster twice.  In addition to Bayakoa and Take Charge Lady, Bornstar (1957 & 1958), and Susan’s Girl (1973 & 1975) accomplished the feat.  Bayakoa (1990) and Banshee Breeze (1998) are co-owners of the track record on natural dirt with both horses stopping the clock in 1:47.00.  Banshee Breeze, a five-time Grade 1 victor, was also voted American Champion Three Year-Old in 1998.  Carriage Trail set the Polytrack speed record in 2008 with an impressive 1:46.77 mark.  Hall of Fame trainers Ron McAnally and Shug McGaughey have won the Spinster a record four times, and two Hall of Fame jockeys – Pat Day and Laffit Pincay – each won five Spinsters.

The baffling fall from grace for star filly Close Hatches began at the 2014 Juddmonte, but handicappers didn't mind so much when the 6-1, 16-1 and 23-1 trio of Don't Tell Sophia, Ria Antonia and Molly Morgan filled out exotic tickets to the tune of $138.20 for the exacta and $754.40 for the trifecta on a $2 bet. Sometimes the sure thing misses in horse racing, and when they do nothing beats having the right combination on a wager with Bovada, our highest recommended online racebook.

Despite the looming presence of 2014 Female Horse of the Year Untapable, the 2015 Spinster had the unmistakable feel of a wide-open race. Untapable, entered the Spinster off three consecutive losses where the four year-old filly had run well, but had to ultimately settle for a pair of second-place finishes and one third while racing in graded stakes competition in New York. With Untapable in less than career-best form and eight well-credentialed fillies and mares ready to test her, the race was tailor- made for handicappers sporting a well-informed opinion. Down the backstretch, Untapable showed signs of interest, stalking the pacesetter before seizing the lead around the turn with good energy. As the champ appeared poised to add another accolade to her resume, a fast-closing Got Lucky joined the fray on the outside and engaged Untapable in a thrilling stretch duel, ultimately out-bobbing her to the wire to win by a neck.

Check back closer to race time for a list of the 2016 Juddmonte Spinster contenders!