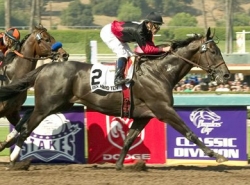 The Malibu Stakes, traditionally held on the day after Christmas, is one of the most anticipated races of the winter. The Grade 1 race offers a purse of $300,000 and also gives three-year-olds one final chance to compete against three-year-olds before they officially turn one year older on January 1. The race marks opening day at Santa Anita and is the first leg in the prestigious Strub Series which includes the Malibu, the San Fernando and the Strub.

Inaugurated in 1952, the Malibu Stakes is run at seven-furlongs on Santa Anita’s main track and is restricted to three-year-olds. In keeping with the trend in California, Santa Anita switched over to a synthetic surface in 2007. In 2010, the historic racetrack switched back to dirt and in 2014, they unveiled a newly renovated dirt course that has been met with mostly positive reviews from the horsemen and jockeys. Twirling Candy, the winner in 2010, holds the stakes record with a time of 1:19.70. [+]

As the first leg of the Strub Series, the Malibu often draws a large, competitive field. As the series continues, the races get longer. The San Fernando is contested at a mile and a sixteenth while the final piece, the Strub, is a mile and an eighth. Only five horses have managed to win all three legs and complete the series – Round Table (1958), Hillsdale (1959), Ancient Title (1974), Spectacular Bid (1980) and Precisionist (1985).

Like many of the mainstay events in California racing, no jockey has been more dominant throughout the history of the race than Bill Shoemaker. The Hall of Fame rider has won eight editions of the Malibu Stakes, starting in 1957 with Round Table. He earned two of his victories in 1977 when the race was split into two divisions and he took both with Romantic Lead and Cojak. His final victory in the Malibu came aboard the legendary Ferdinand in 1986.

Of the trainers, Richard Mandella leads the way in the standings with a record five victories in the Malibu Stakes to his name. The popular West Coast conditioner won his first Malibu in 1988 with Oraibi. He saddled Afternoon Deelites to win in 1995, Dixie Union in 2000, Rock Hard Ten in 2004 and Jimmy Creed capped off his legacy in the race in 2012. Rock Hard Ten, his massive near-black colt standing well over 17 hands, would also win the Strub Stakes.

The great thing about one horse taking the bulk of the Win money in a horse race is that handicappers know lots of other horses will be at higher odds than thay normally might be. That was the case for the 2014 Malibu Stakes, when superstar Shared Belief went off at 1-2, and half the field left the gate at better than 45-1. Included with those was 73-1 Conquest Two Step, who ran the race of his life to finish just a neck back in second and return $21.80 on a $2 Place bet. You can add an additional 3% on top of that, if the bet was placed through a Bovada account, which is just one of the reasons they are our top-rated online racebook.

Oblivious to the owner-trainer drama that had followedin the wake of his Breeders' Cup Sprint victory, Runhappy followed up that effort with a return to the winner's circle in the 2016 Malibu. The solid post-time favorite, Runhappy went to the front of the seven-horse field right out of the gate, and made every call a winning one against a somehwat weak field, hitting the wire in front by more than three lengths. He was chased all the way by a game Marking, who held on for the place money at 5-1, followed 1 3/4 lengths farther back by 7-1 Lord Nelson. Having only run once as a juvenile, the late developing Runhappy capped off his three-year-old season with his sixth straight win since mid-July, and ran his record to seven wins overall in eight lifetime starts.

Check back closer to race time for 2016 Malibu Contenders!