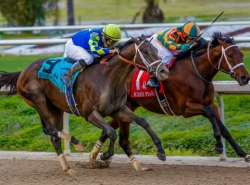 The Risen Star Stakes has evolved over the years into a key prep race and has undergone several changes since the inaugural running in 1973. It was originally known as the Louisiana Derby Trial Stakes but in 1989, it went through a makeover to honor the winner of the 1988 edition, Risen Star. The locally-connected colt was tremendously popular and went on to win the Preakness (G1) and Belmont (G1) on his way to being named champion three-year-old that year. It was ungraded until 2002 when it was granted Grade 3 status and was upgraded to a Grade 2 for 2010. [+]

Though there have been some major upsets in the history of the Risen Star Stakes, few compare to the 2013 edition. Ive Struck a Nerve lit up the toteboard at odds of 135-1 with a bold rally from off of the pace. A $2 win wager returned $272.40 while the favorite, Normandy Invasion, wound up fifth. Though Ive Struck a Nerve was not a factor in the Triple Crown, the race did yield two classic winners. Palace Malice, third, went on to win the Belmont Stakes (G1) and Oxbow, fourth, pulled the upset in the Preakness Stakes (G1).

Though many quality horses have gone through the Risen Star Stakes, one of the most noteworthy names in recent years was Mucho Macho Man in 2011. The massive bay colt earned the first graded stakes victory of his career with a stylish victory and went on to run third in the Kentucky Derby (G1). His career spanned several more years and in 2013, he won the Breeders’ Cup Classic (G1) in a historic performance when trainer Kathy Ritvo became the first woman to saddle the winner of the Breeders’ Cup Classic.

It seems fitting that International Star was the star of the 2015 Risen Star, but even though the colt came into Fair Grounds second major stakes race of the season off a win in the Lecomte Stakes, there were still doubters and the homebred was only third choice in the betting. That made for a nice Win payout of $9.80 and with 4-1 War Story and 8-1 Keen Ice filling out the ticket, a $2 trifecta score of $216, plus an additional 5% on that combo if the bet was placed at Bovada's racebook, the #1 recommended online betting platform.

In a fully loaded 11-horse field, the 2016 Risen Star was not one easily decipherable on paper with seemingly very little separating the top contenders from several longshots in the field. But in the end, the up-and-coming Gun Runner, who had been generating the most backside buzz, rewarded his backers with a nifty stalk and pounce move at 5/1 odds. The Steve Asmussen-trained son of Tapit earned his third win in four starts, avenging his fourth-place fininisScratchedh in the Grade 2 Kentucky Jockey Club Stakes as a juvenile to get the better of winner Airoforce (tenth in the Risen Start) and Mo Tom (third). Longshot Forevamo nearly pulled the upset, finishing just a half length back of Gun Runner and capping a $2 exacta worth $335.20. Trainer Mark Casse announced after the race that the favored Airoforce would most likely be taken off the Derby trail as the star colt failed to duplicate his excellent turf and sloppy track form.