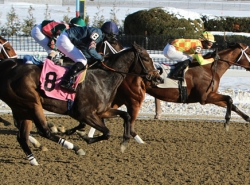 As the second oldest stakes race in North America, the Jerome Stakes at Aqueduct is steeped in tradition with past winners that include several of thoroughbred racing’s most elite and historically significant horses. The Jerome, inaugurated in 1866, is currently a Grade 2 race for three year-olds run in early January for a purse of $200,000.  Additionally, the Jerome is considered an early Kentucky Derby prep race and is included in the qualifying points system with ten points awarded to the winner, four to the runner-up, two to the third place finisher, and one to the fourth place horse.

In recent years, the Jerome has been won by such notable horses as Discreet Cat in 2006 and Silver Train in 2005.  The last Kentucky Derby winner to come out of the Jerome was Fusaichi Pegasus in 2000.  The Jerome also produced the first Kentucky Derby winner in 1875 with Aristides.  In the rich history of the Jerome, perhaps the 1960’s were the most illustrious with two Jerome winners going on to win the Kentucky Derby – Carry Back (1961), and Chateaugay (1963).  In addition, 1960 Jerome winner Kelso is widely considered one of the top five thoroughbred racehorses in the history of the sport.  In 1957, Bold Ruler won the Jerome en route to a victory in the Preakness, and later sired the great Secretariat - another top five racehorse of all-time.   [+]

The Jerome has been run at four different tracks in its history:  Jerome Park, Morris Park Racecourse, Belmont Park, and Aqueduct.  The race has also been run at multiple distances, with the most common being its current distance of about one mile.  Legendary jockey Eddie Arcaro still holds the record for most wins in the race by a rider with six.  Noble Nashua set the Jerome speed record at the one mile distance in 1981 when he stopped the clock in 1:33 2/5.  The race is named for New York City sportsman and financier Leonard W. Jerome who founded Jerome Park and was the maternal grandfather of Winston Churchill.

For most of the 2015 Jerome, it looked like General Bellamy didn't have a chance of coming anywhere near the money. But the 14-1 shot kept at it, and when the field in front of him tired, he came flying late from last to get third and a $14.20 Show payoff for his backers - enough to double your money even if you had bet him $2 across the board. With cash back bonuses from Bovada and our other recommended online racebooks, that return is even better.

The 2016 edition of the Jerome Stakes got the Triple Crown season off to an eventful start when Donegal Moon, a contender for Todd Pletcher, stumbled badly out of the gate and fell to his face, unseating jockey Manuel Franco. The favorite, Flexibility, broke right to the outside of the incident and avoided trouble by relaxing off of the pace.

He maneuvered to the outside under a strategic ride by Irad Ortiz, Jr. and began to make his move as they turned for home. At the top of the stretch, he opened up a three-length lead and drew off to win by a convincing 4 ½ lengths over Vorticity, the pace-setter who held on gamely for second. Bred in New York, it was his first graded stakes win after a pair of runner-up efforts since his maiden win.

Check back closer to the race for the contenders for the 2017 Jerome Stakes.