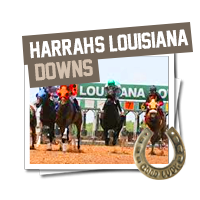 The track at Louisiana Downs includes both dirt and turf surfaces, and the homestretch of more than 1000 feet is one of the longest in North America.

Louisiana Downs set many national records for attendance and handle size during its first twenty years of operation. Louisiana Downs organized a new race, the Super Derby, in 1980. The Super Derby was designed to attract the top three-year-olds from all over the country and bring them to one day of racing at the track. The initial purse ended up being $500,000, which was the largest purse ever put up for three-year-olds. Belmont Stakes winner, Temperence Hill, won the Super Derby and became the third horse in history to earn more than one million dollars.

The Super Derby has proved to be a calling ground for the elites in horse racing. Over the two-plus decades the event has been held, it has attracted: