Bet on The Beverly D Stakes 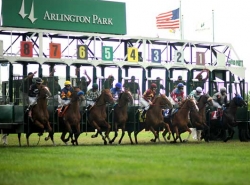 Inaugurated in 1987, the Beverly D. is a Grade 1 turf race at Arlington Park for fillies and mares.  The race is held annually each August on the same day as the grade 1 Arlington Million, and regularly attracts top international and domestic talent.  The Beverly D. is run at the mile and three eighths distance for a purse of $750,000 with the winner automatically qualifying for the Breeders’ Cup Filly & Mare Turf.

2011 Beverly D. winner Stacelita was bred and raced in France before being switched to the barn of American trainer Chad Brown.  After capturing the prestigious French Oaks in 2009, Stacelita launched an American stakes campaign under Brown’s direction in 2011 that also included a win in the Grade 1 Flower Bowl Invitational en route to becoming the 2011 Eclipse Award winner for Champion Turf Female.  Other notable winners of the Beverly D. include Mauralakana (2008), Gorella (2006), Memories of Silver (1997), Hatoof (1994), and Flawlessly (1993).

The 2014 winner, Euro Charline, became the first three year-old to win the Beverly D. in the race’s history, and became the likely favorite for the Filly & Mare Turf before being sidelined with an injury prior to the race.  The Beverly D. is named in honor of the late wife of long-time Arlington Park track owner Richard L. Duchossois.  Trainer Christophe Clement has won the Beverly D. three times:  2001 (England’s Legend), 2007 (Royal Highness), and 2008 (Mauralakana).  Reluctant Guest holds the speed record in the Beverly D., stopping the clock in 1:53.20 in 1990.  To date, no horse has won the Beverly D. twice; however, five different jockeys have two wins including Ryan Moore who won consecutive runnings in 2013 and 2014.

It was easy to overlook Euro Charline in the 2014 Beverly D. as she was making her first start in the US against tough favorite Stephanie's Kitten. But handicappers who liked her win at Royal Ascot liked her even more at odds of 10-1, and really liked the $131.40 exacta payout on top of the 2-1 favorite. When you bet winning exotic tickets with Bovada, our #1 rated online racebook, you can add a nice 5% bonus to that total, cash back that is paid out daily.

Some of the top turf fillies and mares in the country are set to compete in the Beverly D. Stakes at Arlington Park, a key stepping stone towards the Breeders’ Cup Filly and Mare Turf. A full field of fourteen has assembled and Sea Calisi tops the group as the overwhelming favorite at 7-5 odds.

A four-year-old filly bred in France, she made her stateside debut in May off of a seven-month layoff and burst onto the scene as a horse to watch with a victory in the Sheepshead Bay Stakes (G2). In her next start, she was second in the New York Stakes (G2) in a game effort behind her stablemate Dacita (CHI). She is one of two horses for trainer Chad Brown in the race – he will also saddle Elusive Million, a longshot at 30-1.

Her main opposition could come from Ballydoyle (IRE), one of two fillies for trainer Aiden O’Brien. O’Brien has won most of the major turf races in the world and has not yet saddled a winner in this race. Ballydoyle, one of only three three-year-old fillies taking on older horses in this race, is 9-2 on the morning line and is trying to rebound after a poor performance in the Belmont Oaks Invitational (G1). She was a Group 1 winner in France as a juvenile.

Here is the field for the Beverly D. Stakes along with morning line odds.