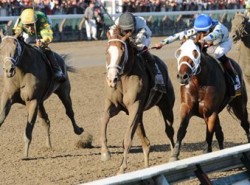 Few horse races epitomize the tradition and nostalgia of the sport of kings as well as the Clark Handicap at Churchill Downs. As one of the oldest races in the United States, the Clark Handicap has been run consecutively since 1875 – the same year Churchill opened its doors. The Clark, a Grade 1 event worth $500,000, is run at a mile and an eighth in late November as the signature race of Churchill’s annual fall meeting.

Because the Clark falls after the Breeders' Cup, it signifies one of the last Grade 1 events of the racing calendar for older horses on the dirt. Because of this, the Clark can pad the resume of horses in the running for Horse of the Year honors. 2013 Three-Year-Old Male Horse of the Year Will Take Charge won the Clark after finishing second in the Breeders' Cup Classic. His Clark victory ensured him a landslide victory at the Eclipse Awards despite running poorly in all three legs of the Triple Crown earlier in the year. [+]

Since 1998, three winners of the Clark went on to win the Horse of the Year Award in the same year of their Clark victories or the ensuing racing season. These winners include Silver Charm (1998), Saint Liam (2004), and Wise Dan (2011). 2009 Clark victor Blame went on to win the Breeders' Cup Classic in 2010, but was denied Horse of the Year honors in favor of Zenyatta whom he defeated in the Classic. Wise Dan’s 2011 victory illustrated his versatility as he went on to claim the 2012 and 2013 Horse of the Year Award running almost exclusively on turf both years. Wise Dan’s half brother, Successful Dan, crossed the wire first in the 2010 Clark, but was subsequently disqualified as Giant Oak was deemed the winner after a steward’s inquiry. Premium Tap’s track record of 1:47.39 for a mile and an eighth was set in 2006.

With a well-balanced field, the money was spread around nicely for the 2014 Clark, with favorite Hoppertunity returning a fair $6.40 for the Win, and 7-1 Protonico getting up for second to anchor a $64.00 exacta payout, and a $300.80 return on a $2 trifecta bet. Handicappers who made their bets through Bovada's online racebook also scored a 5% cash back bonus on those exotic tickets, making a good day at the track just that much better.

Coming off a solid run in the historic Breeders' Cup Classic, where he ran second behind the great American Pharoah, the connections of Effenix were hoping a repeat performance would put him in the winner's circle at the Clark. Breaking well from the #8 post in the field of nine, jockey Mike Smith was able to put his colt in good stalking position early behind a relatively easy pace being set by longshot Mr. Z. Turning for home, Smith swung the Jimmy Jerkens trainee six wide, and from there he collared defending champ Hoppertunity in upper stretch, and from there inched clear to prevail over that one by 3/4 of a length. At almost 90-1, longshot Looks To Spare made a late bid and managed to get a head in front of Travers winner Keen Ice at the wire.

Check back closer to race day for the 2016 Clark Handicap contenders!