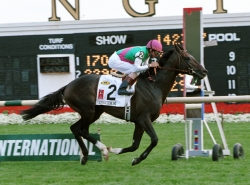 At the time of the inaugural running of the Arlington Million in 1981, the race made history right out of the gate. At that time, it was the first Thoroughbred race in North America to offer a purse of $1 million and in doing so, it established itself at the beginning as a premier race that would attract world class competition.  Run at a mile and a quarter on the turf at Arlington International Racecourse, the race is typically held in the middle of August.

Throughout the rich history of the race, the Million has undergone several name changes. Originally known as the Arlington Million Invitational, the race became known during the 80s as the Budweiser Million through a sponsorship with the beer giant. There have been some bumps in the road during the history of the Million – in 1985, a fire ravaged Arlington Park but against the odds, the race was held as planned. In 1988, while the track was being rebuilt due to the fire, the race was held at Woodbine. [+]

In 1981, the Arlington Million got off to a sharp start in the history books when the indomitable John Henry, the reigning champion turf horse from 1980, earned his sixth graded stakes victory of the year in the freshman edition of the Million. He took home Horse of the Year honors that year and three years later, the remarkable gelding returning to Arlington and won his second Million title. In addition, he was named Horse of the Year again and capped off his Hall of Fame career.

Over the history of the race, there have been two trainers who have been dominant fixtures in the Million. Ron McAnally, the trainer of John Henry, won two editions with his champion gelding and in 1991 returned to victory with Tight Spot. The legendary Charlie Whittingham also saddled three winners of the race, starting in 1982 with Perrault. He also won with Estrapade in 1986 and in 1990 with Golden Pheasant.

There have been three horses in the history of the race to finish first but get disqualified. In 2003, Storming Home was demoted to fourth and Sulamani was awarded the win. The following year, in one of the most eventful and roughly-run races in the history of the Million, Powerscourt was stripped of his victory and Kickin Kris was the official winner. Powerscourt would come back the following year and redeem himself in the 2005 edition. In 2013, Real Solution won the race via disqualification after The Apache was taken down from the win.

With a jockey who took 11 years to win his first stakes race, a self-described "steeplechase trainer", and a field that included the defending champion as well as a European star, Hardest Core went off at more than 11-1 in the 2014 Million, then turned in a determined stretch drive for a thrilling win that paid a cool $25 to win and $10.40 for second. It was a great story, and handicappers with wagers in a racebook like Bovada especially like how it ends, with a cash back bonus on top of that W-P payout.

The field has been set for one of the most aniticapted and prestigious turf races of the year, the Arlington Million. The $1 million event is a Grade 1 and has drawn a field of thirteen contenders representing six total different countries and each is hoping to stamp a ticket to the Breeders’ Cup Turf (G1).

Tryster (IRE), bearing the familiar blue silks of Godolphin Racing, will be making his stateside debut and was a Group 1 winner in Dubai. He was last seen finishing a competitive fifth against some of the best turf horses in the world at Royal Ascot. In a race with a history of European dominance, he has been tabbed as the favorite at odds of 7-2.

The strongest of the United States-based contingent is the up and coming World Approval, fresh off of a breakthrough victory in the United Nations Stakes (G1). He has been steadily improving with each start and the four-year-old will face his toughest test yet at morning line odds of 4-1. Also in the race is the popular local contender, Illinois-bred The Pizza Man. He won this race last year and is trying to recapture that glory after struggling in his recent starts but does have a home track advantage.

Here is the field for the Arlington Million along with morning line odds.