Bet on The Woodward Stakes 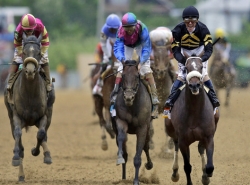 Now held as the traditional major stakes race to close the Saratoga Race Course summer meet, the Woodward Stakes is a Grade 1 race for older horses run at 1 1/8 miles over the dirt. First run in 1954, the race is named for the late prominient thoroughbred owner William Woodward, and has been held over the years at Aqueduct and Belmont race tracks, prior to its 2006 move to Saratoga. The distance of the race has varied over the years from the inaugural 1 mile event to as much as 1 1/2 miles.

Intially a handicap race, the the Woodward was also run as an allowance event for several years, but has been classified as a weight-for-ages stakes event since the early 90s. Over the years a number of champion horses have made an appearance in the Woodward, with the great Forego showing his dominance in the mid-1970s by winning the Woodward four times in a row. Other multiple winners of the Woodward include Sword Dancer (1959-60), Kelso (3 times from 1961-63), Slew O' Gold (1983-84), Cigar (1995-96), Lido Palace (2001-02). Both Affirmed and Seattle Slew won the Woodward in their Triple Crown championship seasons, but the great Secretariat did not, finishing 3rd on a a sloppy Belmont track in 1973 when the race was run at 1 1/2 miles. [+]

In 2009, super filly Rachel Alexandra strut her stuff when beating males in the Woodward, the first filly to ever win the race. She was followed two years later by another filly in Havre de Grace, who, like Rachel before her, went on to claim American Horse of the Year honors for 2011. A pair of Hall of Fame jockeys in Angel Cordero Jr and Jerry Bailey share top spot with six Woodward victories each, while the late, great Bill Shoemaker won the Woodward five times, the first in 1958 and the last in 1980.

The 2014 Woodward was expected to be a duel between Itsmyluckyday and Moreno, and the handicappers had it exactly right, with those two co-favorites battling throughout the race, even playing a bit of bumper car down the stretch, making contact five times before Itsmyluckyday prevailed by a half length. What most didn't see, however, was 25-1 longshot Prayer For Relief getting up for third, keying a $2 trifecta payout of $184.50. Horseplayers who bet that combination through the Bovada racebook enjoyed a bit more of a payout on top of that, thanks to Bovada's generous daily cash back bonus.

A field of nine has drawn into the 2016 Woodward on closing weekend at Saratoga Springs. A deserved favorite at 2-1 in the morning line is Frosted, who comes in off a pair of recent Grade 1 wins in the Metropolitan Handicap at Belmont, and at Saratoga to open the meet in the Whitney Stakes. The 1 1/8 miles is probably his best distance, he's drawn a good post position with the expected early leader Bradester (6-1) just on his outside so he should be able to get good position early just off the lead.

Bradester himself comes into the Woodward riding a three-race winning streak, including taking the (G1) Stephen Foster over a strong field, and has shown signs of being an improving horse.  Down on the inside, Shaman Ghost was the 2015 Queen's Plate winner in Canada, and took the Brooklyn Invitational over a couple of these two starts back. He's getting lasix for the first time. Samraat (10-1) was in that field in the Brooklyn and finished fourth. After a solid Triple Crown campaign last year, he's been winless in his last eight tries although he's been in the money in three of his last four. Mubtaahij (5-1) has a similar profile to Samraat, but after splitting much of his career between Dubai and North America, he has yet to get a win on US soil in three tries.