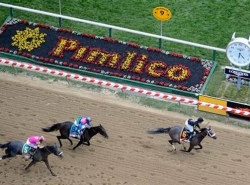 Although perhaps the least-famous of the US Triple Crown races – which include the Kentucky Derby, run two weeks previous, and the Belmont Stakes, run three weeks later – the Preakness Stakes carries huge significance as the “second jewel” in the Triple Crown. Coming into the race, only the winner of the Derby has a chance at becoming Triple Crown champion. [+]

So every year the racing public watches the Preakness with keen interest to see if a potential Triple Crown contender will emerge.

Run at Baltimore’s Pimlico Race Track, the inaugural Preakness was held in 1873 and was run at the distance of 1 1/2 miles, with a total purse of $3,000. Since 1925, the race has been run at its current distance of 1 3/16 miles, and today offers a purse of $1 million. The first winner was a horse called Survivor, and his winning margin of 10 lengths would remain the race record for 132 years, until Smarty Jones set the current standard of 11 1/2 lengths in 2004. Having won the Kentucky Derby, Smarty Jones really captured the attention of the racing public with his decisive Preakness run, but he was denied the Triple Crown when he finished second in the Belmont.

In one of the most well-known stories in horse racing, Secretariat captured the 1973 Preakness on his way to a Triple Crown title. However, due to a malfunction of the infield clock, he was awarded a final time of 1:55, a second off the race record time set two years previous by Canonero II. The official Pimlico track clocker had the time as 1:54.2, while two writers with the racing paper The Daily Racing Form, both reported a time of 1:53.2, which would have been a new record. For the next 40 years, the official Preakness record remained with Canonero II, until a special forensic study of the race film was conducted in 2012. Making use of modern technology, investigators concluded that Secretariat had actually run the race in 1:53. Presented with the evidence, the Maryland Racing Commission voted to make that the official time, giving Secretariat the records in all three Triple Crown races.

Although the Preakness has produced more wins by a filly than the other two Triple Crown races with five, four of those came in the first 50 years of the race, until 2009 when Rachel Alexandra (who had skipped the Kentucky Derby but who had won the Kentucky Oaks) went wire-to-wire to beat the boys by a length. The win gave jockey Calvin Borel his first Preakness, while trainer Steve Asmussen won his second in three years, having captured the 2007 race with Curlin.

Although the Kentucky Derby winner will almost always go into the Preakness as a heavy favorite, the other side of the coin is that many good horses will be overlooked in the betting pools, such as Oxbow who went on to win at 15-1 odds in 2013, and Shackleford at 13-1 in 2011. Finding those diamonds in the rough is down to the handicapping skills of the horseplayer, but when a winner has been chosen, the best place to lay down a bet is through Bovada Racebook, our top online racebook choice.

The Preakness Stakes from Pimlico Race Course in Baltimore will take place on Saturday, May 20. Final entries and post positions will be drawn on Wednesday, May 17. Here's a look at the probable starters, with future odds by Bovada.

1) Always Dreaming (Even) - The 2017 Kentucky Derby winner will be going for the second leg of the Triple Crown, and will certainly be the post time favorite. He's now won four in a row by open lengths, and is clearly the one to beat.

2) Classic Empire (5-1) - The pre-race favorite for the Derby never really got a good shot at it, getting slammed right out of the gate and having to come from the back of the pack - not his usual style - on a sloppy Churchill track. He'll be looking for redemption on even terms with Always Dreaming.

3) Lookin' At Lee (11-1) - Rode a perfect rail trip all the way around Churchill to come from the back and pass tired horses and get up for second in the Derby. He'll likely start from the back of the pack again, but he might not get the exact same set-up.

4) Gunnevera (12-1) - Similar to Classic Empire, was compromised by the traffic and track conditions of the Derby, moved forward a bit but never really found his best stride to finish seventh. Expect a better effort in Baltimore to at least get  into the money.

5) Hence (12-1) - Like others, had traffic trouble in the Derby, but never really made a move forward and was a bit of a disappointment for many who gave him a long shot chance. Late closer will have to show his Sunland Derby win wasn't a fluke.

6) Conquest Mo Money (16-1) - May take over Hence's spot as the live long shot candidate in the Preakness. Started his career with three wins, and ran well to get second in the (G1) Arkansas Derby. He would have made the Derby field when others dropped out, but his connections withdrew his name early to prepare for this race.

7) Cloud Computing (20-1) - Lightly raced colt didn't run as a two-year-old, won his first start and then was second in the (G3) Gotham Stakes and third in the (G1) Wood Memorial. Now he'll try to take another step up in competition level again.

8) Multiplier (20-1) - He took three starts to get his first lifetime win - just like Always Dreaming - and then won the (G3) Illinois Derby by a head following a trip up the rail. None of the horses he beat there are as good as what he'll face here.

9) Senior Investment (25-1) - He took six races to climb up through the maiden and allowance ranks before running sixth in the (G2) Louisiana Derby behind Girvin, who finished 13th in the Derby. Came from way back to win the (G3) Lexington Stakes by a head last out.

10) Term Of Art (25-1) - Experienced California-based runner as nine life time starts with the last six all at the graded-stakes level, but only has a win last year and a third-place finish two starts back to show for it.

On Saturday May 18 Baltimore's Pimlico Race Course will play host to the 2019 Preakness Stakes. Although Kentucky Derby winner Country House will skip the race with an illness, the Preakness has drawn a wide-open field of 12. They'll be racing 1 3/16 miles on the Preakness dirt for a total purse of $1.5 million.  […]