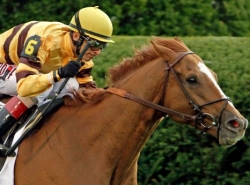 The Shadwell Turf Mile is one of the highlights of the fall meet at Keeneland Race Course in Lexington, Kentucky. Held in October, the Grade 1 event got a purse upgrade to $1 million for the 2014 edition. It is not just the lucrative purse, however, that gives this race appeal. The race is part of the Breeders’ Cup Challenge Series and is an automatic qualifier for the Breeders’ Cup Mile (G1). The one mile turf event has traditionally attracted some of the best turf horses in both North America and internationally to compete.

Inaugurated in 1986, the race has undergone some major changes over the years. Originally, the purse was only $50,000 and the race was contested at a mile and an eighth. Then, it was called the Keeneland Breeders’ Cup Stakes. Two years later, the race received Grade 3 status and proceeded to grow from there. Shadwell Farm’s Kentucky division of their world-renowned breeding operation began sponsoring the race in 1999 and the race was upgraded to a Grade 1 in 2002 and the purse continued to grow. [+]

One jockey has dominated the race more than any other in history. Robby Albarado has won four editions of the Shadwell Turf Mile, starting in 2004 with Nothing to Lose. He also won with Thorn Song (2008), Court Vision (2009) and pulled the upset aboard Silver Max in 2013. Trainer Kiaran McLaughlin has saddled three winners of the race, more than any other trainer. He sent out Dumaani (2005, 2006) and Altibr (2000), all carrying the royal blue colors of Shadwell Farm.

No horse has been more of a force in the Shadwell Turf Mile than two-time Horse of the Year and multiple Eclipse Award winner Wise Dan. From four appearances in the race, the popular chestnut gelding enjoyed some of his most memorable victories and some of his most disappointing losses. After a fourth-place finish behind the formidable Gio Ponti as he notched his second consecutive win in the race in 2011, Wise Dan won the 2012 edition and parlayed that into a victory in the Breeders’ Cup Mile (G1). The following year, when rain forced the race off of the turf on to the synthetic main track, he lost to Silver Max.

The 2014 Shadwell was the final race the great career of Wise Dan, and the two-time horse of the year went out in style, winning at odds of less than 2-1. While there wasn't a lot of Win money to be made on the champ, horseplayers were excited to see 20-1 Grand Arch, and 10-1 Sayeed take the Place and Show spots, paying out a $231.00 trifecta on a $2 bet, plus cash back bonus money of an additional 5% on any wagers placed through the Bovada racebook.

In an absolutely wide-open running of the Shadwell Turf Mile, the 2015 renewal featured the added variable of a yielding turf course. In the end, however, it was a pair of 4/1 shots battling it out in the final yards as Grand Arch held on to win his second consecutive graded stakes race while holding off a determined late bid from Arlington Million hero The Pizza Man. Grand Arch, winner of the Grade 2 Fourstardave Handicap at Saratoga in his last start, looked to be a comfortable winner in the final furlong before The Pizza Man began to gobble up ground under jockey Florent Geroux. The shorter distance of the Shadwell Mile served as an ideal prep for The Pizza Man sharpening his speed in preparation for the Breeders’ Cup Turf four weeks later. Grand Arch, who finished second in the 2014 Shadwell Mile to reigning Horse of the Year Wise Dan, used the prep as a springboard to the Breeders’ Cup Turf Mile.

For 2016 Shadwell Mile contenders check back closer to race day!