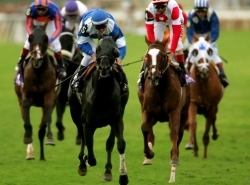 Held every August at one of Thoroughbred racing’s premier destinations, Saratoga, the Sword Dancer Invitational Handicap is one of the prestigious races in the country for older horses on the turf. The Grade 1 race offers a purse of $500,000 and in addition, it is a key prep for the Breeders’ Cup Turf and several winners have parlayed a victory in the Sword Dancer into Breeders’ Cup glory. Named after prolific turf star Sword Dancer, the race is currently contested at a mile and a half.

Though the race currently holds a distance of a mile and a half, the race has undergone several major changes since it began in 1975. Originally run at Aqueduct, the Sword Dancer spent the first two years being run at six furlongs on the main track. After that, the distance was lengthened to a mile and a sixteenth and the surface switched to turf at Belmont Park. It was not until 1980 that the race found its home at Saratoga at a mile and a half. [+]

Only one trainer has won more than two editions of the Sword Dancer Invitational and that honor goes to Hall of Fame conditioner Bill Mott. Mott saddled his first winner of the race in 1987 with Theatrical who would go on to win the Breeders’ Cup Turf that year. He also sent out Fraise to win in 1992 and in 1996 won with Broadway Flyer. Jockeys Angel Cordero, Jr., Jean-Luc Samyn and Pat Day have all won the race three times.

Over the history of the race, several horses have won the race twice. In 1983, Majesty’s Prince won and came back the following year to repeat. El Senor pulled off a double in 1989 and 1990. In 2001 and 2002, the popular gray gelding With Anticipation earned two of the biggest wins of his length career. Grand Couturier won the 2007 and 2008 editions while Telling followed on his heels with wins in the 2009 and 2010 installments of the Sword Dancer.

With the betting money being spread around on three almost equal favorites in 2-1 Main Sequence, 5-2 Imagining and 7-2 Twilight Eclipse, the 2014 Sword Dancer provided a nice payout of $6.10 for the Win when Main Sequence came home first, and $21.60 and $49.20 on $2 exacta and trifecta wagers when the other two followed him home. Picking up on obvious results like that is a key to succesful longterm handicapping, and making your bet through our top-rated online racebook at Bovada is a key to getting great rewards and bonuses on top of what you would get back at the track.

With the retirement of 2014 Sword Dancer and Breeders' Cup Turf winner Main Sequence, a familiar theme played out in the 2015 renewal of the Sword Dancer, with a top-class European turf shipper proving too classy for domestic rivals. Flintshire, an English-bred and internationally-raced horse trained by the renowned Andre Fabre, showed a devastating turn of foot to seize control entering the final turn. The five year-old son of Dansili maintained a comfortable advantage throughout the stretch despite aggressive pursuit from Red Rifle to win by two and a quarter lengths. The victory broke a four-race losing streak for Flintshire who hadn’t finished worse than third in his last eight races, including a game second in the Group 1 Saint Cloud against superstar filly Treve. Sent to post at even money, Flintshire earned an automatic berth in the Breeders’ Cup Turf at Keeneland. Veteran domestic runner Twilight Eclipse ran on for third to cap the trifecta.

Check back closer to the race for information about the contenders for the 2015 Sword Dancer Invitational.