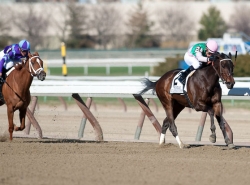 Since the inaugural running of the Gazelle Stakes in 1887, the race has been a fixture in the New York racing scene. Restricted to three-year-old fillies, the Gazelle Stakes can serve as a stepping stone towards the Kentucky Oaks (G1) and is now typically held alongside the major Kentucky Derby prep for the colts, the Wood Memorial (G1). Held at Aqueduct, the Gazelle is run at a mile and an eighth on the main track and offers Grade 2 status and a purse of $300,000.

The Gazelle Stakes was run at several locations before eventually finding a home at Aqueduct. Originally run at the now-defunct Gravesend Race Track from 1887 through 1916, the race moved to Aqueduct for the 1917 edition and was held there until 1969 when it relocated to Belmont Park. It was held at Belmont until 2008 and then moved back to Aqueduct for the 2009 edition and has been run there since. [+]

Two jockeys have won four editions of the Gazelle Stakes, Angel Cordero, Jr. and Javier Castellano. Cordero, a Hall of Fame rider and legend in the sport, won with Maud Muller (1974), Revidere (1976), Kamikaze Rick (1985) and Versailles Treaty (1991). Castellano piloted home Exogenous (2001), Pine Island (2006), Music Note (2008) and My Miss Sophia (2014). While Cordero has since returned from the tack, Castellano is still an active member of the jockey colony and could still add to his total.

Trainer Claude “Shug” McGaughey, III has saddled five winners of the Gazelle Stakes and among those winners include some of the greatest champions of his training career. In 1991, he sent out Versailles Treaty to win and returned in 1993 for a victory with Dispute. In 1994, Heavenly Prize won the Gazelle on her way to an Eclipse award for champion three-year-old filly.  In 1996, the great My Flag, the reigning champion juvenile, added another win to her resume. Finally, in 2006 he sent out the ill-fated Pine Island to her second Grade 1 victory.

While many great champions have competed in the Gazelle Stakes, one of the most successful and popular in recent years was Silverbulletday in 1999. The race was at this point being run in the fall at Belmont Park and Silverbulletday had won both starts since finishing seventh against male rivals in the Belmont Stakes (G1). The reigning champion juvenile and winner of the Kentucky Oaks (G1), she thrilled fans to a championship performance with a decisive win as the heavy favorite under Jerry Bailey.

Any handicappers who put money on a filly named Money'soncharlotte to crack the bottom of the trifecta in the 2015 Gazelle were thrilled when the longest shot on the board at 60-1 survived a rough trip to get up just in time for the Show, keying a nice $130 payoff on a $2 ticket. Add in the bonus you'd get by placing the wager through Bovada, or one of our other recommended racebooks, and it was a good day at the races, even though you never left home.

Out of the gate in the 2016 Gazelle, 8-5 co-favorite Lewis Bay went a bit wide going into the first turn on a wet Aqueduct track, allowing 5-1 Mo d'amour to slip through and take up the challenge with the other co-favorite, Clair de Lune down the backstretch and into the far turn. It might have been a mistake that could have cost the race, but by the time the field turned for home, Lewis Bay had made up for that misstep, had caught the leaders, and then powered away down the stretch to an easy win by 1 1/2 lengths, with jockey Irad Ortiz dialling down the Chad Brown trainee well before the wire. Royal Obsession made a late rally to get up for second, seven lengths in front of Mo d"Amour, with Clair de Lune fading in the last 1/8 of a mile to finish last.

For 2017 Gazelle Stakes contenders check back closer to race day!