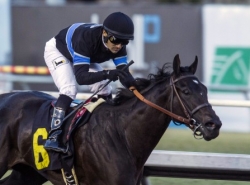 The Los Alamitos Futurity has undergone several name changes since the race was inaugurated in 1981. Originally known as the Hollywood Futurity, it later became the CashCall Futurity while it was run at the now-defunct Hollywood Park. The race was run at Los Alamitos in 2014 for the first time and the Grade 1 event has been added to the “Road to the Kentucky Derby” points series. Run at a mile and a sixteenth, the race offers a purse of $500,000 in addition to Kentucky Derby qualifying points.

The Futurity is a race that has produced a remarkable, accomplished list of winners. During the tenure at Hollywood Park, the race has produced five horses who have won the Futurity on their way to the Kentucky Derby in addition to numerous horses who have gone on to win the Preakness and Belmont Stakes. A.P. Indy, one of the most influential stallions in contemporary history, won the Futurity in 1991 and went on to win the Belmont Stakes and the Breeders’ Cup Classic the following year. [+]

No trainer has dominated the Futurity quite like trainer Bob Baffert. The popular West Coast trainer has won six editions of the Futurity. His streak began in 1997 with the following year’s Kentucky Derby and Preakness champion Real Quiet. He followed that up with Captain Steve in 1999 and eventual Preakness and Belmont winner Point Given in 2000. He took the 2008 edition with Pioneerof the Nile and the 2009 running with dual champion Lookin at Lucky. He also won the 2011 edition with Liason.

Run routinely at the end of the year, the race is ideal for the slower developing juveniles to end their season with an exclamation point. In 2013, Shared Belief capped off his perfect season with a dominant performance in the Futurity as the heavy favorite, cementing his status as the top two-year-old in the country. Though he sat out the Triple Crown in 2014, he went on to be a major force to be reckoned with the second half of the year.

In a small field with a couple heavy favorites hitting the board, the payoffs for wagers made at the track are typically nothing to get excited about. In the case of the 2014 Los Alamitos, this was reflected in a meagre $7.80 exacta, and $12.20 trifecta. What horse players can get excited about is getting up to 5% more of a payout in daily cash back whether they win or lose bets placed online through the Bovada racebook, our top-recommended racebook choice.

Trainer Bob Baffert brought a loaded hand to the 2015 LA Futurity, and proceeded to walk away with the lion's share of the purse money, as his favored Mor Spirit and Toews On Ice finished 1-2 over the Los Alamitos dirt course. As the heavy post-time favorite, Mor Spirit took a few strides to settle coming out of the gate, but jockey Gary Stevens was able to place the colt off the pace through the early stages before going four wide in the stretch to eventually assume command and win by just more than a length. Toews On Ice, meanwhile ran second for the early part of the race within close striking distance of the lead, took over at the top of the lane but couldn't hold off Mor Spirit late. Those two set themselves apart from the field, with 25-1 longshot I'malreadythere another six lenghts back in third. With the win, Mor Spirit picked up 10 points toward the 2016 Kentucky Derby entry standings.

Check back closer to race day for the 2016 Los Alamitos Futurity contenders!