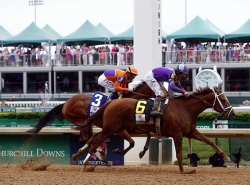 The Kentucky Oaks is on a shortlist of the most historic, prestigious, and popular horse racing events in the United States.  In fact, many consider the race to be second only in these categories to its counterpart – the Kentucky Derby.  A Grade 1 race currently offering a purse of $600,000, the Kentucky Oaks takes place annually on the first Friday in May, and has been run consecutively at Churchill Downs since 1875.  The race is restricted to three year-old fillies and run at a distance of a mile and an eighth with each horse carrying 121 pounds.  Each year in the new millennium, the Oaks has exceeded 100,000 guests and the race regularly ranks third in thoroughbred racing attendance behind only the Kentucky Derby and Preakness Stakes.

With such a rich history, most of the top three year-olds in the country each year are pointed towards the Kentucky Oaks by their connections.  Kentucky Oaks winners include some of the very best fillies in the history of thoroughbred racing replete with multiple Eclipse champions, and members of the National Museum of Racing’s Hall of Fame.  The list of renowned fillies to win the Kentucky Oaks includes: Cicada (1962), Dark Mirage (1968), Davona Dale (1979), Princess Rooney (1983), Open Mind (1989), Silverbulletday (1999), Ashado (2004), Rags to Riches (2007), Proud Spell (2008), Rachel Alexandra (2009), and Blind Luck (2010).  [+]

In recent years, Kentucky Oaks winners represent a particularly elite class beginning in 2004 with Ashado who bankrolled nearly $4 million while winning Eclipse Awards in 2004 and 2005.  In 2014, Ashado became the most recent Oaks winner to be inducted into the Hall of Fame.  2007 winner, Rags to Riches, captivated the American public in her next race after winning the Oaks, becoming the first filly to win the Belmont Stakes in over a century beating eventual two-time Horse of the Year Curlin in the process. 2008 winner Proud Spell was named Eclipse Champion Three-Year Old Filly, and 2009 marked Rachel Alexandra’s twenty length tour de force.  Rachel Alexandra’s phenomenal Oaks victory led to 2009 Horse of the Year honors after she became the first filly to win the Preakness Stakes in 85 years, the second filly ever to win the Haskell, and the first filly in racing history to win the Woodward Stakes – a race for older male horses. 2010 Oaks winner Blind Luck earned over $3 million in her career and 2014 winner Untapable went on to capture the Breeders’ Cup Distaff the same year.

Bird Town holds the Kentucky Oaks speed record for a mile and an eighth, finishing her victorious effort in 1:48.64 in 2003.  Hall of Fame trainer Woody Stephens won the Oaks a record five times over his career (1959, 1960, 1963, 1978, and 1981).  In 2006, Lemons Forever became the biggest long-shot to win the Oaks at odds of 47/1.  Trainers Bob Baffert, Steve Asmussen, and Todd Pletcher have made their mark on the Kentucky Oaks with each winning multiple times since 1999.

The Road to the Kentucky Oaks series is broken up into two segments. The first tier of races is called the “Kentucky Oaks Prep Season” which consists of sixteen races which offer points on a scale of 10-4-2-1. The second round of races is referred to as the “Kentucky Oaks Championship Series” which consists of some of the most prestigious races for three-year-old fillies and offers points on a scale of 100-40-20-10 to the top four finishers. By wagering online through a racebook like Bovada, which offers the chance to wager on all the top tracks and races, you can track the entire series and get bets in on which fillies will vie for the Kentucky Oaks title.

The 2016 edition of the Kentucky Oaks lost the brightest star in the three-year-old division when champion Songbird was forced to the sidelines with a fever. With her absence, the race has become a much more wide open and competitive affair.

Rachel’s Valentina has been given the edge on the morning line as the favorite at odds of 7-2 and will try to replicate the success her dam, Rachel Alexandra, had in the 2009 Kentucky Oaks (G1). As a juvenile, Rachel’s Valentina was a Grade 1 winner before finishing second to Songbird in the Breeders’ Cup Juvenile Fillies (G1). She returned off of a freshening to finish a hard-fought second in the Ashland Stakes (G1) at Keeneland.

She will face several rivals including the second choice, Cathryn Sophia. Her undefeated streak came to an end when she finished third in the Ashland (G1). In addition, Land Over Sea will again try to step out of the shadow of Songbird. After two consecutive runner-up efforts, she shipped to Oaklawn and won the Fair Grounds Oaks (G2) easily.

Here is the field for the 2016 Kentucky Oaks along with morning line odds.