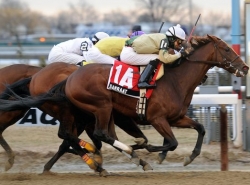 The Gotham Stakes is a Grade 3 race at Aqueduct Racetrack currently run at a mile and one sixteenth on dirt for a purse of $400,000.  Inaugurated in 1953, the Gotham is held in early March and remains an important Kentucky Derby prep race as well as the local prep for the Grade 1 Wood Memorial.  The Gotham Stakes is a mid-tier Kentucky Derby qualifying race with the first through fourth place finishers receiving 50-20-10-5 points respectively.  Several of racing’s most accomplished horses have won the Gotham including Native Dancer, Dr. Fager, Secretariat, and Easy Goer.

Although the Gotham has not produced a Kentucky Derby winner since Secretariat in 1973, the race boasts many other winners of note over the last three and a half decades.  The 1980’s featured Gone West (1987) and Easy Goer (1989) with the former eventually becoming one of the greatest sires of his generation, and the latter earning induction into the National Museum of Racing Hall of Fame.  The Gotham continued its prolific churn of successful colts throughout the 1990’s with Thirty Six Red (1990), dead-heat winners Lure and Devil His Due (1992), and Talkin Man (1995).  [+]

In 2000, Gotham winner Red Bullet finished second in the Wood Memorial to eventual Kentucky Derby winner Fusaichi Pegasus.  His connections elected to skip the Kentucky Derby, setting the stage for a rematch between the two colts in the Preakness.  Red Bullet was able to turn the tables on his rival by three and three-quarter lengths to become a Classic winner.  2009 winner I Want Revenge went on to win the Wood Memorial and was the morning line favorite for the Kentucky Derby before scratching the morning of the race with an ankle injury.  2011 Gotham winner Hansen was the 2010 Breeders’ Cup Juvenile winner and Eclipse Award winning Two Year-Old Horse of the Year.

The Gotham has been run at the one mile distance as well as its current distance of a mile and one sixteenth.  Easy Goer holds the stakes record at the shorter distance with a time of 1:32.40, and I Want Revenge holds the record at the current distance with his mark of 1:42.65.  The race was restored to a mile and one sixteenth in 2006.  Five different jockeys have won the Gotham three times including Mike Smith, who is the only currently active jockey on the list.  Shug McGaughey also has three Gotham wins, standing alone as the leading trainer.

A nice patient ride by jockey Taylor Rice was the key for Tiz Shea D to get up for second in the 2015 Gotham, and with the colt making only his second lifetime start, he was sent off at a juicy 11-1. On top of a tidy $8.00 Place payoff, Tiz Shea D on the bottom of the exacta with favored El Kabeir returned almost $40, plus any bonuses you would receive by placing the bet with Bovada, our top-rated online racebook.

Overcoming a speed-favoring Aqueduct strip and a rail bias, Shagaf stayed perfect with his third win in as many starts in the 2016 Gotham Stakes. The good-looking son of Bernardini took a while to get into gear, but was able to gradually wear down the pacesetting Laoban by 1 3/4 lengths at the wire. Sent to post as the 6/5 favorite, Shagaf gave owner Skeikh Hamdan of Shadwell Farm his second legitimate Kentucky Derby contender, joining the also undefeated Mohayman. Trained by Chad Brown, Shagaf completed the mile and one sixteenth race in in 1:45.90 and stamped himself as the likely favorite or second choice in the Grade 1 Wood Memorial - his final prep for the Kentucky Derby.

Check back closer to race day for 2017 Gotham Contenders!