Bet on The E.P. Taylor Stakes 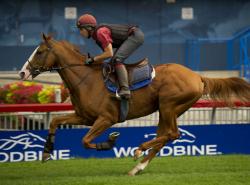 The E.P. Taylor stakes began in 1956 at the old Woodbine racetrack, switching venues to the new Woodbine Racetrack facilities in 1962. This competition is for fillies and mares three years and older at a length of 1¼ miles on the Woodbine turf course. Originally called the Nettle Handicap, the race was renamed in 1981 in posthumous respect for Edward Plunket Taylor. He was breeder and owner of Northern Dancer – winner of the 1964 Kentucky Derby - and founder of the Jockey Club of Canada.

As a Grade I event with a hefty purse of $500,000, the E.P. Taylor Stakes attracts some of the best female horses, requiring owners to be confident enough in their chances to invest in the stakes. Further increasing the competition is the fact that horses from all over North America and as far as Europe travel to take part in this race. Depending on the date the E.P. Taylor Stakes takes place, it's considered one the final prep races for the Breeders' Cup Filly and Mare Turf. [+]

Northern Queen finished first in the 1965 edition of the E.P. Taylor Stakes and was sired by Nearctic, who also sired Northern Dancer. The 1991 winner was Lady Shirl, who produced Perfect Shirl and Shakespeare. Perfect Shirl was surprise winner of the Breeders' Cup Filly and Mare Turf and Shakespeare was a top dual grade one winner who went on to compete in the 2005 Breeders' Turf Cup. The only horse to win the E.P. Taylor Stakes twice is Kitty Girl in 1957 and 1958 and the record time of 2:00.68 was set in 2007 by Mrs. Lindsay. The biggest upset in the history of the race was scored by Lahaleeb in 2009 as a 44-1 longshot.

It was all about the luck of the Irish at the 2014 E.P. Taylor Stakes, with two horses bred in the Emerald Isle in Just the Judge and Odeliz hit the wire first and second. It was expected that Just the Judge was going to be a top contender and was bet down to 3-2 on the tote, but Odeliz was a bot more of an outsider at 4-1, and the two combined for a $16.50 payout on a $2 exacta. Betting through Bovada's online racebook would have boosted that payout, as our top-rated internet wagering platform gives their customers 5% cash back daily on exotic wagers.

The 2016 edition of the E.P. Taylor Stakes has drawn a truly international field with horses representing six separate countries in the loaded field of thirteen fillies and mares.

The ambitiously-named Best in the World (IRE) has been tabbed as the morning line favorite at odds of 3-1 for trainer Aiden O’Brien. A three-year-old daughter of Galileo (IRE), she has won two of her eight starts and was a Group 3 winner in Ireland. She was second in her most recent start and will be making her North American debut. Ryan Moore, one of the top jockeys in the world, has made the trip abroad and has retained the mount.

The field is contentious and she should face significant opposition from Rainha da Bateria, the second choice at 4-1 odds and one of two horses for the powerhouse Chad Brown barn. The four-year-old filly has a breakthrough win at Woodbine last time out in the Canadian Stakes (G2) and appears to have rounded into sharp form. Brown will also saddle the Chilean longshot Guapaza (CHI) who is a graded stakes winner in both Chile and the United States.

Also in the field is Banzari (GB) who is owned by celebrity chef Bobby Flay. She won a Group 3 in France in her most recent start to earn her fifth career victory.

Here is the field for the E.P. Taylor Stakes along with morning line odds.