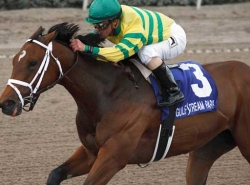 The Davona Dale Stakes has been part of the Florida racing landscape since 1988 and is a stepping stone for three-year-old fillies heading towards the Kentucky Oaks (G1). Held in February at Gulfstream Park, the race is carded at a mile and a sixteenth on the main track and offers Grade 2 status and a purse of $200,000. The race is typically run on the same day as the Fountain of Youth Stakes (G2) for three-year-old males and both races serve as key prep races for the Florida Derby (G1) and Gulfstream Park Oaks (G2).

The stakes race bears the name of Davona Dale, a homebred that raced under the colors of Calumet Farm from 1978 through 1980. After a brief and nondescript juvenile season, the bay daughter of Best Turn developed into a dominant three-year-old. She won eight races in a row and swept the Kentucky Oaks, the Black Eyed Susan Stakes and the Acorn Stakes, the three races that coincide with the traditional Triple Crown. In addition, she took New York’s Triple Tiara – the Acord, the Mother Goose and the Coaching Club American Oaks.  She was inducted into the National Racing Museum Hall of Fame in 1985. [+]

Throughout the history of the Davona Dale Stakes, no jockey has been more dominant than John Velazquez with six victories. In 1999, just as he was beginning to step into the spotlight as a top jockey, he won his first with the ill-fated Three Ring. He also won with Latour (2001), Yell (2003), Sis City (2005) Wait a While (2006), and R Heat Lightning (2011). Still active and enjoying great success, Velazquez could potentially add to this number. Three trainers – Todd Pletcher, Sonny Hine and Claude “Shug” McGaughey, III – have each won three editions of the Davona Dale Stakes.

While many talented fillies have won the Davona Dale Stakes, one of the standouts in recent years is Wait a While from 2006. Trained by Todd Pletcher, the popular gray filly made her first start of the year an impressive one with a fourteen-length triumph in the Davona Dale. She went on to finish well in another prep race and was third in the Kentucky Oaks (G1). She really hit her stride, however, when she switched to the turf and went on to win eight more races over the course of her career. She took home the Eclipse Award in 2006 for Champion Three-Year-Old Filly.

While it was no surprise the speedy Ekati's Phaeton went to the leadin the 2015 Davona Dale, it was a surprise that the 27-1 longshot held on for a Win payoff of $55.60, triggering an exacta of more than $300. Find live longshots like that when you place your wagers through and online racebook like Bovada, our top recommended horse betting site.

Though Songbird is still the biggest name in the three-year-old filly division, she does not have the Kentucky Oaks yet in the bag as was shown at Gulfstream Park in the 2016 running of the Davona Dale Stakes (G2).

Undefeated from three starts heading into the Davona Dale (G2), Cathryn Sophia had quickly ascended the ranks from her modest beginnings breaking her maiden at Parx Racing in Pennsylvania. Under Javier Castellano, she pressed the pace and launched her bid as they approached the top of the stretch and drew off comfortably to win by seven lengths under only mild urging. Lewis Bay closed to finish a well-beaten second.

Purchased for only $30,000, the Maryland-bred filly has increased her earnings to over $335,000 and will continue on the road to the Kentucky Oaks undefeated.

Check back closer to the race for the contenders for the 2017 Davona Dale Stakes!