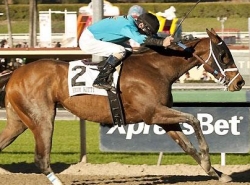 The La Brea Stakes, held typically as part of the opening day card for Santa Anita’s winter meet, is one of the most prestigious races for three-year-old fillies of the year. It also marks the final time as sophomores that they will compete against fellow three-year-olds. With coveted Grade 1 status which can skyrocket a horse’s value as a broodmare, the race also offers a purse of $300,000 and is held at a distance of seven-furlongs over Santa Anita’s main track.

Since the first running of the La Brea in 1974, the race, along with host Santa Anita Park, has undergone some changes. It was originally contested at a mile and a sixteenth and the distance was shortened in 1978. Santa Anita switched to a synthetic racing surface in 2007 only to switch back to conventional dirt in 2010. In 2014, the track surface went through a complete overhaul and a new and improved dirt surface was unveiled. [+]

Like the Malibu Stakes, the counterpart race for males, the La Brea is part of a three-race series consisting of the mile and a sixteenth El Encino (G2) and the mile and an eighth La Canada (G2) which coincides with the Strub Series.  Since the series began in 1975, only three fillies have managed to sweep all three legs – Taisez Vouz (1978), Mitterand (1985) and Got Koko (2003). Just as the La Brea is restricted to three-year-old fillies, the El Encino and La Canada are for four-year-old fillies.

Two jockeys have dominated the record books of the La Brea with five wins each, Chris McCarron and Gary Stevens.  McCarron won two editions of the race in 1982 when it was split into divisions with Neil’s Briquette and Beautiful Glass. He also won in 1991 with D’Or Ruckus, 1995 with Exotic Wood and 1996 with Hidden Lake. Stevens won in 1987 with Family Style, 1990 with Akinemod, 1994 with Top Rung, 1998 with Magical Allure and 2013 with Heir Kitty. While McCarron is retired, Stevens remains active and could still add to his streak.

California stalwart Bob Baffert has been a force to be reckoned with and has six winners of the La Brea to his credit. The popular trainer won his first La Brea with Arches of Gold in 1992. He saddled Magical Allure to win in 1998, Hookedonthefeelin in 1999, Pussycat Doll in 2005, Downthedustyroad in 2006, champion Indian Blessing in 2008 and Book Review in 2012. He has two fillies lined up to compete in the 2014 edition and could add to his growing record.

Many noteworthy fillies have competed in the La Brea Stakes. Among them were Terlingua, the winner of the 1980 edition who would go on the produce the prolific sire Storm Cat. In 2000, fresh off of an upset victory in the Breeders’ Cup Distaff, Spain won the La Brea to solidify her sophomore season. The Eclipse award-winning two-year-old from the previous year, Indian Blessing capped off another award-winning season in 2008 with a win in the La Brea, earning the title of champion female sprinter.

It's not surprising that Sam's Sister was overlooked at 13-1 in the 2014 La Brea, given that the filly was making her stakes debut and had finished 8th in her previous race. But if you're a handicapper who took her three straight wins to start her career as a sign she was ready to step up, you were rewarded with a $27 return on a $2 Win bet - and then even more, thanks to generous bonuses if you made the wager with Bovada, our highest-rated online racebook.

Birdatthewire lived up to her name in the 2015 La Brea, rallying from well back in deep stretch to nip frontrunner Hot City Girl by a half-length and score her first Grade 1 victory at odds of better than 10-1. After breaking a bit slow, Birdatthewire raced at the back of the nine horse field until the turn heading for home, where jockey Mike Smith took her to the middle of the track and set her down for her charge. Despite running inot rlatively slow fractions and drifting a bit in the lane, she was just able to get the job done. Behind her, Hot City Girl finished strongly ahead of Cavorting, the post-time favorite. For Birdatthewire, the race marked her fourth win in 11 lifetime starts, and third graded-stakes score.

Check back closer race day for an full list of the 2016 La Brea Stakes contenders!