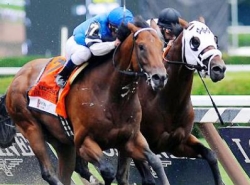 The Carter Handicap boasts one of the richest histories in New York racing. Since the inaugural running in 1895, the race has been primarily held at Aqueduct Racetrack in Ozone Park, New York. A Grade 1 race with a purse of $500,000, the seven-furlong contest has routinely attracted some of the top sprinters and milers in the country. Held typically in April, the Carter Handicap is held as part of the undercard on Wood Memorial Day.

The Carter Handicap has been contested at numerous distances over the years. At the beginning, it was held at a mile and a quarter. The distance gradually shortened until it was held at about seven furlongs in 1898 and was held at exactly seven-furlongs from 1903 onward. The Carter is the only North American Thoroughbred race to finish in a triple dead heat which occurred in 1944 when Bossuet, Brownie and Wait a Bit all hit the wire together. [+]

Many great champions have competed in the Carter Handicap including Forego, a member of the National Racing Museum Hall of Fame. Regarded as one of the all-time great Thoroughbreds, Forego was known for his versatility and won prestigious races from seven-furlongs to two-miles. He won the Carter in both 1974 and 1975. During the 1975 edition, the war-horse carried a handicap weight of 134 pounds and was named Horse of the Year for the second consecutive year.

In 1999, Artax blazed home to complete the seven-furlongs in 1:20.04, defeating a field of eight rivals and setting both a new stakes record and a new track record. The flashy bay colt would go on to be a part of one of the most bizarre racing incidents in his next start, the Maryland Breeders’ Cup Handicap (G3) where a fan ran on the field and attempted to strike him. Despite that, Artax went on to win the Breeders’ Cup Sprint (G1) that fall.

The exotics blew up following the 2015 Carter Handicap, with 53-1 Green Gratto, and 31-1 Dream Saturday hitting the ticket with 5-1 winner Dads Caps to produce an exacta of $295.50 and a trifecta of more than $1700! Betting exotic tickets through online racebooks like Bovada, our #1 rated racebook, add to those payouts with cash back on all exotic wagers.

As a top-rated sprinter over the past couple of years - including running in the past two Breeders' Cup Sprints - the only thing missing from Salutos Amigos resume was a Grade 1 victory. With a win in the Carter Handicap, that mission has now been accomplished, as the posttime favorite spotted the field four lengths on the backstetch and then came roaring down the middle of the track to head Calculator at the wire. Racing over a wet track, the six year old Kentucky-bred appeared to have left it a bit late, and had to cahnge course slightly in mid-stretch, but a quick turn of foot in the last 1/8 of a mile proved to be enough. Calculator also came off the pace to just miss, while defending champion Dad's Caps hung on for third.

For 2017 Carter Handicap contenders check back closer to race day!