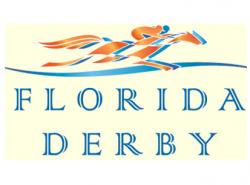 Originally known as The Flamingo Stakes, The Florida Derby has been on the racing calendar at Gulfstream Park continuously since 1952. Classified as a Grade I event since 1973, and with a purse of $1 million, the Florida Derby has long been considered one of the major prep races for the Kentucky Derby. The race is restricted to three-year-old horses, and is at 1 1/8 miles over the Gulfstream dirt course. The top four horses in the race can earn points toward making the lineup for the Kentucky Derby.

It’s interesting to note that none of the three Triple Crown winners since the Florida Derby began – Secretariat, Affirmed or Seattle Slew – won the Florida Derby, although Alydar did win the 1978 running before finishing second to Affirmed in each of the Kentucky Derby, The Preakness Stakes and the Belmont Stakes. In what could be considered a measure of revenge, in 1991 Alydar’s son Strike the Gold finished second in the Florida Derby, and then went on to capture the Run For the Roses a month later.

In near-similar fashion, in 1990, Unbridled won the Florida Derby and followed that up by winning the Kentucky Derby, and in 1996 his son Unbridled’s Song tried to turn the same trick, winning at Florida but finishing fifth at Kentucky as the favorite. The Florida Derby was also the fifth of six straight wins for Barbaro, who would add number six when he won at Kentucky, before tragically breaking down in the Preakness.

In winning the 1957 Florida Derby, Gen. Duke set what at the time was a world record for 1 1/8 miles at 1:46.80, a time that still stands as the race record (Alydar’s 1:47.00 the next closest). That race was also the first of three consecutive wins for Hall of Fame jockey Bill Hartack, a win record he shares with four others. Due to injury, Gen. Duke was forced to skip the Kentucky Derby, but Hartack himself would win the race after picking up the mount on Iron Liege.

If you’re a horse owner, trainer or jockey, you know the Road to the Triple Crown could very well go through Florida. For horseplayers, the top runners in the Florida Derby are always worth strong consideration when making your Kentucky Derby picks on the first Saturday in May.

With two clear-cut favorites in Materiality and Upstart hitting the board in first and second, there wasn't a whole lot of value to be had in the 2015 Florida Derby. This is a great example of where a betting through an online racebook - such as our #1 rated racebook at Bovada  - makes a lot of sense, with gauranteed cash back on straight wagers and exotics that will help to boost your return on investment, even when you're betting on the favorites.

The 2016 running of the Florida Derby (G1) has attracted one of the most competitive fields in recent years and will feature a showdown between two undefeated and highly regarded colts, Mohaymen and Nyquist.

Mohaymen, the slight favorite at even-money, is perfect from five starts and has a home track advantage. Of his five victories, his two most recent have come at Gulfstream Park and both have been against graded stakes competition. The gray son of Tapit was purchased for $2.2 million and is trained by Kiaran McLaughlin.

Nyquist, trained by Doug O’Neill, is the reigning champion two-year-old and is a perfect six for six. As a juvenile, he capped off his award-winning season with a victory in the Breeders’ Cup Juvenile (G1) which cemented the Eclipse Award. He won the San Vicente Stakes (G2) in his three-year-old debut last time out at Santa Anita.

Here is the field for the 2016 edition of the Florida Derby along with morning line odds.