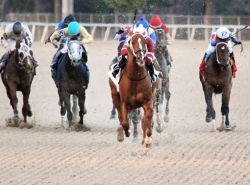 The Southwest Stakes is the first step on the road to the Kentucky Derby that goes through Hot Springs, Arkansas. Held every February at Oaklawn Park, the Southwest Stakes is a Grade 3 race with a purse of $300,000 and, as part of the Kentucky Derby points system, offers points to the top four finishers towards a spot in the starting gate for the Run for the Roses.  Run at a mile and a sixteenth, the race typically sets up as a prep race for both the Rebel Stakes (G2) and Arkansas Derby (G1).

The Southwest Stakes was inaugurated in 1968 and has undergone some major changes since Mr. Cozy won the first edition. Originally contested at six-furlongs, the race increased to one mile in 1984 and further stretched out to a mile and a sixteenth in 2013. The race briefly held graded stakes status from 1995 through 1999 but was downgraded for the 2000 running. In 2008, the race regained Grade 3 status. [+]

Throughout the history of the Southwest, Oaklawn mainstay Robert Holthus has won the race more times than any other trainer. Holthus has saddled five winners of the Southwest, starting with Proper Reality in 1988. He also won the race with Afternoon Affair (2000), Son of Rocket (2001), Greater Good (2005) and Lawyer Ron (2006). The veteran trainer passed away in 2011 at age 77, leaving behind a strong legacy of success.

In recent years, trainer Bob Baffert has dominated the Southwest Stakes and has won the race four times since 2010. In 2010, he sent out Conveyance to win with Martin Garcia aboard. In 2012, the race drew such a large field that it was split into divisions. Baffert swept both divisions with Castaway and Secret Circle, both with Rafael Bejarano aboard. Secret Circle would go on later in his career to win the Breeders’ Cup Sprint. Baffert and Bejarano also won the 2013 edition with Super Ninety Nine.

The most noteworthy horse to compete in the Southwest Stakes in recent years has been the popular Pennsylvania-bred, Smarty Jones. In 2004, the chestnut colt kicked off his three-year-old campaign and burst onto the national scene with an authoritative win in the Southwest Stakes. From there, he remained undefeated in the Rebel and the Arkansas Derby before racing into the history books with wins in the Kentucky Derby (G1) and Preakness Stakes (G1). He fell one-length short of the Triple Crown in the Belmont Stakes (G1) in his first career defeat and final race.

Jockey Calvin Borel has made his living on making one late charge with his horses, and such was the case in the 2015 Southwest, when he drove The Truth Or Else from dead lasst after a half mile to within a length of the win. And when the 23-1 longshot got his nose in front of favorite Mr. Z, it paid for bettors with a huge $173.80 exacta, and $14 more for anyne holding a Place ticket - both of which would earn bonus cash back at Bovada, our #1 racebook choice.

With a wide open and full field assembled, the 2016 edition of the Southwest Stakes (G3) was sure to be full of surprises. Collected, one of Bob Baffert’s many talented three-year-olds, went to the gate as the lukewarm favorite.

Siding Spring set the early pace with the favorited, Collected, rating patiently behind him in third with American Dubai. At the top of the stretch, Martin Garcia asked Collected to rally but it was American Dubai who got the jump on him and hit the lead. He opened up a 1 ½ length advantage only to be caught by two closers flying from off of the pace, Suddenbreakingnews and Whitmore. Suddenbreakingnews had been racing exclusively at Remington Park and earned his first graded stakes victory as well as a spot on the Kentucky Derby trail.

Check back closer to the race for the contenders for the 2017 Southwest Stakes.