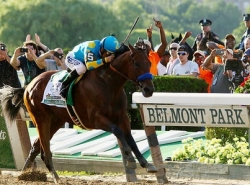 First run in 1867, the Belmont Stakes has become world-famous as the third and final leg in the US Triple Crown racing series. Any horse that goes into the Belmont after having won the Kentucky Derby and Preakness Stakes has a chance to enter racing immortality by claiming the Belmont and being crowned Triple Crown champion, a feat that has only been accomplished 11 times, and not in the past 35 years. [+]

Held just three weeks after the Preakness in early June, the Belmont is considered to be the toughest of the three Triple Crown races, given that the 1 1/2 miles distance is a quarter mile longer than the Kentucky Derby, and 5/16ths of a mile longer than the Preakness. The race really begins as the horses come out of the final turn and start the long drive down the Belmont stretch, and over the years many hearts have been broken as a potential Triple Crown winner falters just before the finish line and loses out on the Triple Crown to a hard-charging late runner.

Over the years, 20 horses have won the first two legs of the Triple Crown, only to be beaten in the Belmont, with the most recent being California Chroome in 2014. In addition, I’ll Have Another was on track for a Triple Crown title in 2012, but was scratched with a foot injury the day before the Belmont. Two years in a row, 1997 and 1998, trainer Bob Baffert had the potential Triple Crown champion – first with Silver Charm and then with Real Quiet – but finished a close second in the Belmont.

Of those that have successfully captured the Crown, perhaps the most famous is Secretariat, who stunned the world in 1973 with his effort, winning by more than 30 lengths and in the process setting the race record at 2:24, a time that still stands. Other legends of the Belmont and the Triple Crown include Sir Barton, the first TC champion, Man ‘O War (whose son, War Admiral, would also win the Belmont to take the Triple Crown), Whirlaway and Citation. In what is often seen as the last Golden Age of racing, Secretariat, Affirmed and Seattle Slew all won the Belmont and the Triple Crown over a period of five years, with Seattle Slew’s 1978 victory the last time a Triple Crown champion has been declared.

The very first winner of the Belmont Stakes in 1867 was a filly named Ruthless, and over the years two other fillies have won the race, Tanya in 1905 and then Rags to Riches in 2007. In addition, jockey Julie Krone became the first female rider to capture a Triple Crown race when she guided Colonial Affair to the winner’s circle in 1993.

For 2013, the Belmont winner was Palace Malice, giving each leg of the Triple Crown a different winner (Orb, Kentucky Derby; Oxbow, The Preakness Stakes) and giving jockey Mike Smith his second win in the last four Belmonts.  In 2014, California Chrome came oh-so-close to to a Belmont win and a Triple Crown title, finishing fourth, less than 2 lengths back of winner Tonalist.

To read full Belmont Stakes history - click on the [+] button!

With the most wide-open field in years, the 2017 Belmont Stakes has a solid favorite in Classic Empire, but there are a few fresh long shots coming into the race that rate serious consideration for an upset. Whichever way you'll want to bet, promotions and bonuses from our online racebook partners, including Bovada, our top racebook choice, is the best way to get in on Belmont Stakes action.

Although there is no Triple Crown on the line, the 2017 Belmont Stakes is looking like an excellent betting race, with a deserving favorite in Classic Empire and a handful of others who need to be considered as legitimate contenders. The race features a foreign invader in Epicharis, a superstar in Japan who has won three of four lifetime, and five others that ran in the Kentucky Derby, skipped the Preakness Stakes and are coming in fresh for the Belmont.

The final entries and post position draw won't take place until Wednesday, June 7. Here's a look at the probable lineup, with odds from Bovada's racebook.

1) Classic Empire : He went eyeball-to-eyeball with Kentucky Derby winner Always Dreaming and put that one away before just missing the Preakness win by a head. The class of the field, this will be his fourth start in eight weeks so fatigue may be a factor.

2) Epicharis (5-1): Won his first four starts in Japan and finished second by a nose in the UAE Derby to Thunder Snow, who refused to race in the slop at Kentucky. This will be the toughest test of his career.

3) Lookin' At Lee (5-1): Late-running colt had a dream trip to get up for second in the Kentucky Derby, and broke poorly and still got up for fourth in the Preakness, but the fact is he hasn't won a graded-stakes race in eight tries.

4) Senior Investment (8-1): Another that comes from way back, he started the year running at the allowance level. Showed some promise to get third in the Preakness but needs to be better again to contend.

5) Irish War Cry (8-1): A big disappointment when he ran 10th as co-favorite in the Kentucky Derby, he looked great in winning twice this year, but terrible in his two losses.

6) Tapwrit (10-1): Perhaps a bit of a sleeper horse, he's better than his recent record indicates. He's also a half-brother to 2014 and 2016 Belmont winners Tonalist and Creator.

7) Twisted Tom (16-1): The only gelding in the field, he's been successful in the lower stakes ranks, and comes into this on a three-race win streak, but he's taking a big step up in class.

8) Gormley (16-1): California-based runner was ninth in the Kentucky Derby following a very slow win in the (G1) Santa Anita Derby.

9) Patch (20-1): One-eyed wonder had to start the Derby way out in the #20 post, eventually finishing 14th. He's not very fast and only has a maiden win to his name, but his running style suits the race and he is bred to go the distance.

10) J Boys Echo (20-1): He's a hard-trying sort who always gives an honest effort, but he looks to be a notch below the best here.

11) Multiplier (25-1): Lightly raced colt has shown good speed in his last two, including a win in the (G3) Illinois Derby, and an okay sixth in the Preakness, he'll need to outrun his pedigree to win at 1 1/2 miles as his sire and dam were both sprinters.

12) Meantime (25-1): Front-running colt had every chance to win the (G2) Peter Pan at Belmont Park but couldn't close the deal. Would need to take a big step forward from that effort to win here.

13) Hollywood Handsome (33-1): He won a fairly quick allowance-level race as a prep for this, and prior to that was fifth in the (G3) Illinois Derby behind Multiplier. There's not a lot in his background to say he can race 1 1/2 miles.

The race goes Saturday, June 10 from Belmont Park, with a post time of 6:37 PM Eastern.