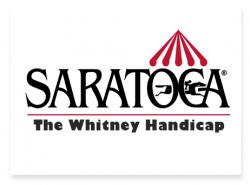 The Whitney Stakes (formerly the Whitney Handicap) is a Grade 1 race for three-year-old and up thoroughbreds held every summer at Saratoga Racecourse in Saratoga, New York. Named for the Whitney family, who have been prominent in American horse racing for decades, the Whitney was first held in 1928 and the first winner was in fact a filly, Black Maria. The next year another filly, Bateau, won the race, but only four other fillies have visited the winner’s circle since, the last being Personal Ensign in 1988.

For the first couple of decades the Whitney was run at 1 1/4 miles, but since 1955 it has been run at the present distance of 1 1/8 miles. It has been rated as a Grade I event since 1981, and currently offers a total purse of $750,000. Since 2007, the Whitney has been part of the Breeders’ Cup World Championships ‘Win and You’re In’ series, with the winner of the Whitney granted automatic entry into the Breeders’ Cup Classic. In 2012, Fort Larned won the Whitney, and then went on to win the Classic. [+]

Over the years, many legendary horses in American racing have competed in and won the Whitney, including War Admiral (1938), Kelso, who won the race three times over the course of five years between 1961 and 1965, Easy Goer (1989) and Awesome Again (1998). In addition to Kelso’s three wins, Discovery won the race three straight times between 1934 -’36. The race record for the 1 1/8 miles distance was set in 2007 by Lawyer Ron, who covered the distance in 1:46.64. That was also the first of back-to-back Whitney wins by jockey John Velazquez, who came back the next year to win on Commentator.

One of the most famous runnings of the Whitney Handicap occurred in 1973, when the great Triple Crown winner Secretariat, as the heavy favorite, suffered his first defeat in four starts, finishing second to a virtual unknown named Onion. Prior to the Whitney, Onion had been running mostly in lower-level races, while Secretariat had followed up his Triple Crown run with a win in the Arlington Invitational. But Onion went to the lead from the gate and never gave it up, despite late pressure from a hard-charging Secretariat. After the race, it was revealed Secretariat ran while suffering a low-grade fever. Onion, meanwhile, didn’t win another stakes race for the rest of his career.

Over the 85 years of the Whitney, only once, in 1961, has the winner been disqualified, when Our Hope won the race but was DQ’d and placed second (giving Kelso the first of his three wins). On the human side of the Whitney, Hall of Fame jockeys Pat Day and Jerry Baily together hold the record for most wins with five. The late John Gaver Sr. holds the trainers’ title, having won the race five times between 1942 and 1958.

In a strong field with a heavy favorite, the 2014 Whitney was primed for an upset, and that came in the form of 10-1 Moreno reaching the wire first, and combining with the 8-1 Itsmyluckyday to hit a $2 exacta worth $157.50. Savvy horseplayers who bet that combination online through Bovada, our #1 recommended online racebook, were able to up that total thanks to 5% cash back bonus on all exotic wagers.

The field has been set for the 2016 edition of the prestigious Whitney Stakes (G1) and while the field lacks size, there is no shortage of star power in the formidable 3-5 favorite Frosted.

Frosted returned stateside after a fifth-place finish behind the brilliant California Chrome in the Dubai World Cup (G1) and rebounded from that defeat with a scintillating victory in the Metropolitan Mile (G1). That was his second victory of the year and he will be trying to add a third notch to his win column for the year and join the upper echelon ranks of the older male division.

He will face some opposition from veteran Effinex who also has a pair of graded stakes victories to his credit this year. He was last seen winning the Suburban Handicap (G2) at Belmont Park after a disappointing sixth-place finish in the Stephen Foster (G1). He has not been consistent this year but when he runs his race, he can hold his own at the top level.

Stepping up to the big leagues at 8-1 odds is Comfort, a lightly-raced son of Indian Charlie trained by Todd Pletcher. He went to the sidelines last year after an average effort in the Lexington Stakes (G3) and returned off of a seven-month layoff with three consecutive victories. He is stepping up in class after winning a minor stakes race at Belmont Park.

Here is the field for the 2016 Whitney Stakes along with morning line odds.