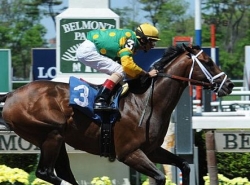 The Metropolitan Handicap, commonly referred to as the “Met Mile,” is one of the most traditional and important stakes races in the United States.  A Grade 1 race currently offered for a purse of $1.25 million at Belmont Park, the Met Mile is a race for three year olds and upward that was inaugurated in 1891 at the now defunct Morris Park Racetrack.  In 2014, Belmont Park management made the decision to run the Met Mile on the Belmont Stakes undercard instead of in its usual spot in late May.  Including the Belmont Stakes and Met Mile, the card featured ten stakes races worth a combined $8 million – the second most lucrative day of racing in North America trailing only Breeders’ Cup Saturday.  The card was met with great success setting a New York Racing Association on-track record for wagering handle.

The history of the Metropolitan Handicap is one decorated with many of racing’s all-time great thoroughbreds with past winners including the likes of Hall of Fame inductees and champions such as Gallorette (1946), Tom Fool (1953), Native Dancer (1954), Kelso (1961), Carry Back (1962), and Buckpasser (1967), Forego (1976), Holy Bull (1994), and Ghostzapper (2005) just to name a few.  Winners of the Met Mile have won multiple runnings Kentucky Derby, Triple Crown races, and Breeders’ Cup events.  2014 winner Palace Malice won the 2013 Belmont Stakes and was considered the best older horse in training before being sidelined with an injury forcing him to miss the Breeders’ Cup Classic.  His Belmont/Met Mile double was the first  since Conquistador Cielo accomplished the same feat in 1982 within a span of just five days.  In 2007, Corinthian used his Met Mile victory as a springboard to his win in the inaugural Breeders’ Cup Dirt Mile at Monmouth Park.  Ghostzapper won the Met Mile in 2005 after winning the 2004 Breeders’ Cup Classic and Horse of the Year Award.  [+]

The Metropolitan Handicap is widely recognized by thoroughbred breeders as one of the most important races to win along with the Breeders’ Cup Classic and Kentucky Derby.  Horses that make elite milers have often proven to become superior stallions once their racing careers have ended.  Three Met Mile winners – Fappiano (1981), Buckpasser (1967) and Native Dancer (1954) – had profound influences on thoroughbred breeding, passing their superior bloodlines on to numerous champions.

The quality of the field was reflected in the 2015 Met Mile odds, with solid contenders such as Private Zone and eventual winner Honor Code both offering 7-1, bookending a nice $290 triafecta with 2-1 favorite Tonalist. Cash back offers through Bovada and our other recommended racebooks make those odds even better for online handicappers.

In a wide open renewal of the Met Mile, the 2016 cast features a field of 13 in a race that is notably absent of an abundance of early speed. With no true front runer signed on, Anchor Downs (12/1) is the most likely pace setter, but he figures to be followed closely by Marking (8/1), and a pair of stablemates in Stanford (5/1), and Blofeld (10/1). The well-regarded Frosted makes his 2016 U.S debut after finishing fifth  in the Dubai World Cup in March, and Calculator (10/1) looks like a value play as the talented four year-old looks to finally break through with a grade 1 stakes victory after several close calls. Ami's Flatter is another dangerous horse after winning the Grade 3 Commonwealth Stakes at Keeneland in April and posting formidable speed figures in two of three starts this year. Noble Bird (9/2) has been quirky this year, but posted a monster 110 Beyer Speed Figure last out while winning the Grade 3 Pimlico Special.