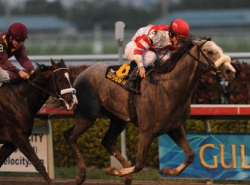 The Grade 2 Holy Bull Stakes is an important Kentucky Derby prep race held annually at Gulfstream Park in late January.  The one mile race on the main track carries a purse of $400,000 with ten Kentucky Derby qualifying points awarded to the winner, four to the runner-up, and two to the third place finisher.  Inaugurated in 1990 as the Preview Stakes, the race was renamed in 1996 in honor of U.S. Racing Hall of Fame horse Holy Bull.

While the Holy Bull has been contested at different distances over the years, it has remained a popular early-season destination consistently featuring some of the best three year-old colts in the nation.  Holy Bull winners Go For Gin (1994) and Barbaro (2006), each won the Kentucky after their respective triumphs, and 2005 Holy Bull winner Closing Argument finished a close second to Giacomo in the Run for the Roses.  Other notable past winners include the undefeated Algorithms (2012), who beat 2011 2 Year-Old of the Year Hansen in the Holy Bull.  2013 winner, Itsmyluckyday, went on to grade 1 success as an older horse, winning the 2014 Woodward Stakes. [+]

Currently, the Holy Bull Stakes is part of an incentive-based series for trainers and owners that couples the race with the Florida Derby and Preakness Stakes.  A lucrative $5,500,000 bonus is awarded to any horse that can win the Holy Bull, the Florida Derby, and the Preakness.  So far, this combination of wins has never been achieved.  A $550,000 bonus is offered to any horse that competes in the Holy Bull, then finishes first, second or third in the Florida Derby, and wins the Preakness.  This feat, also, has not been achieved.  Go For Gin holds the Holy Bull speed record for a mile and a sixteenth – the most common distance of the race – with his time of 1:41.62.  Barbaro holds the mile and an eighth speed record at 1:49.31, and Dialed In recorded the fastest clip at a mile stopping the timer in 1:35.19. Trainer Nick Zito has won the Holy Bull a record three times with wins in 1994 (Go For Gin), 1995 (Suave Prospect), and 2011 (Dialed In).

Kicking off the Gulfstream stakes season with a lesson in handicapping, the three top favorites all finished in the money in the 2015 Holy Bull, something a observant horseplayer would have expected with a close look at past performances of the horses involved. You can find handicapping tips and get access to bet on dozens of tracks and races when you have an account with an online racebook, including Bovada, our long-time, top-rated racebook partner.

Mohaymen entered the 2016 Holy Bull undefeated and strictly the one to beat after capping a three-race juvenile campaign in 2015 with consecutive grade 2 victories in the Nashua and Remson. Trainer Kiaran McLaughlin raved in the weeks leading up to the race about the colt’s training and all the hype proved to be warranted as the striking gray son of Tapit raced eagerly behind a pair of rivals before making a middle move under jockey Junior Alvarado and powering away from grade 1 winner Greenpointcrusader in the stretch. Mohaymen’s final margin - 3 1/2-lengths – was accomplished with relative ease further solidifying his status as a prime Kentucky Derby contender. Sent to post at 1/5 odds in the Holy Bull and purchased for Sheikh Hamdan for $2.2 million in 2014 as a yearling, Mohaymen continued to meet and exceed all lofty expectations.