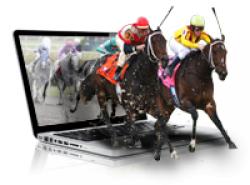 From the world’s richest horse race, the $10 million Dubai World Cup, England’s legendary Epsom Derby, or the classic American race, the Kentucky Derby, all year around there are major horse races taking place somewhere in the world. For racing fans, this means there is no one season for their favorite sport, and no shortage of horse racing to enjoy.

While traditionally, our primary focus has been on North American racing events, we now offer information on more than just the top races in the US and Canada. We now feature horse races around the world, from Australia to the UK, to Ireland, providing plenty of opportunity to watch and wager on the best equine athletes the sport has to offer.

In the United States, the racing calendar is highlighted by two major events; the Triple Crown series that is run in the spring, and the Breeders’ Cup World Championships that are held over two days in the fall. [+]

Comprised of the Kentucky Derby, the Preakness Stakes and the Belmont Stakes, the Triple Crown is open to three-year-old thoroughbreds that are just entering the prime racing point of their career. The Breeders’ Cup, meanwhile, features 15 different races that generally separate horses by distance and surface specialty as well as gender. The races range from shorter sprint events for two-year-olds, to the 1 1/2 mile turf race, to the headline event, the Breeders’ Cup Classic.

But while the Triple Crown and Breeders’ Cup draw the most public attention, there are plenty of other top-calibre races taking place at tracks across the United States. These include the Travers Stakes at Saratoga, the oldest racetrack in the US, the Haskell Invitational run at Monmouth on the famous New Jersey shore, and, out west under the California sunshine, the Santa Anita Derby at beautiful Santa Anita Park. These are just a few of the dozens of world-class races run at tracks throughout the US.

In Canada, meanwhile, the focus for major racing is primarily at southern Ontario’s Woodbine Race Track, a top-notch facility that features the E.P Taylor Turf Course, known by racing trainers and owners to be one of the best turf courses in the world. Woodbine is also home to the $1 million Queen’s Plate, the oldest continuously run horse race in North America, and also the first leg of the Canadian Triple Crown. It’s in the fall when turf racing really gets would up at Woodbine, and events such as the E.P Taylor Stakes and Woodbine Mile draw a star-studded international field every year.

While perhaps lesser known to North American race fans, Australia (and New Zealand) has a long and proud history of thoroughbred horse racing, and the two contries together have produced some of the greatest horses in history, including Black Caviar, who was undeafeated in 25 lifetime starts and who holds the unofficial record as the world's fastest horse. Before him came the great Phar Lap, who was a champion during the Great Depression and who captured the public imagination much like Seabiscuit did in the US. There are more than 300 race tracks in Australia and New Zealand, and dozens of major races offering purses in the tens of millions of dollars. The Melbourne Cup Festival of racing takes place from September to November and is considered a major sporting event for all Australians.

Horse Races in the UK and Ireland

In many ways, the UK can be considered the home of modern horse racing as we know it. Organized horse races began in Newmarket in the county of Suffolk as far back as the 1600s, with the King's Plate race first taking place in 1634. Today there are hundreds of race meetings taking place throughout the UK and Ireland consisting of both flat and jump racing, and prestigious events such as the Royal Ascot meet are regularly attended by members of the Royal Family, many of whom have long been involved in racing as owners and breeders. The breeding programs in both the UK and Ireland are world renowned for producing some of the best turf horses in history, and UK and Ireland-bred horses race around the globe in all of the biggest horse racing events.