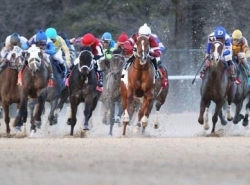 The Rebel Stakes is a Grade 2 race held annually at Oaklawn Park as the second leg of the track’s three year-old stakes program that also includes the Grade 3 Southwest Stakes and Grade 1 Arkansas Derby.  Inaugurated in 1961, the Rebel Stakes has always been run at the mile and one sixteenth distance.  The purse for the 2015 Rebel Stakes was increased to $750,000 from $600,000.   The race is part of the Kentucky Derby qualifying points system with the first through fourth place finishers earning 50, 20, 10, and 5 points respectively.

The Rebel has a well-established history of producing winners that go on to enjoy Kentucky Derby and Triple Crown success.  1980 Rebel winner Temperance Hill triumphed in the Belmont over Derby winner Genuine Risk and Preakness winner Codex.  The 1990’s proved to be a successful decade for the Rebel with 1992 winner Pine Bluff winning Preakness, and 1998 winner Victory Gallop using the Rebel as a springboard to wins in the Arkansas Derby and Belmont.  Victory Gallop also famously ran second to Real Quiet in both the Kentucky Derby and Preakness before ending the latter colt’s bid to become the first Triple Crown winner since Affirmed in 1979.           [+]

In the new millennium, Smarty Jones became the first of a string of prosperous Rebel graduates, winning the Arkansas Derby, Kentucky Derby, and Preakness before losing the only race of his career in the Belmont, falling just short of capturing the Triple Crown in 2004.  The Rebel witnessed a string of major horses in the years following Smarty Jones with  Lawyer Ron (2006), Curlin (2007), and Lookin at Lucky (2010) all becoming extremely successful racehorses, each winning at least one Eclipse Award.  Curlin went on to win the 2007 Preakness and Breeders’ Cup Classic, while running third in the Kentucky Derby and second in the Belmont en route to Horse of the Year Honors.  In 2008, Curlin won the Dubai World Cup, and several other major stakes races to repeat as Horse of the Year and retire with more earnings than any thoroughbred in American racing history.

The impressive feats of past Rebel winners has continued in recent years with 2012 Rebel hero Secret Circle winning the Breeders’ Cup Sprint in 2013, and falling just a neck short of duplicating that feat in 2014.  In 2013, Will Take Charge was an unproven commodity before his Rebel victory, but went on to win the Grade 1 Travers and Grade 1 Clark Handicap, while running second in the Breeders’ Cup Classic to claim Three Year-Old Colt of the Year honors at the Eclipse Awards.  2014 winner Hoppertunity won the Clark Handicap and is considered one of the top horses in training in 2015.  Vanlandingham holds the Rebel speed record, stopping the timer in 1:41 flat in 1984.

When there's a solid contender in the field such as American Pharoah was for the 2015 Rebel, savvy handicappers know the best chance to cash a big ticket is usally found by putting the favorite on top of a exacta or trifecta, and then putting a combination of other horses undeneath. In the Rebel, 5-1 Madefromlucky and 8-1 Bold Conquest under the winner produced a $2 trifecta payout of $28.80. You can put another 5% cash bacl on top of that, when you place that bet through Bovada's racebook.

With a full field signed on for the 2016 Rebel, the race had the look and feel of a wide-open wagering event with at least half of the 14 runners looking like legitimate win candidates. The field included the 1-2 finishers from the Grade 3 Southwest Stakes with winner Suddenbreakingnews and runner-up Whitmore returning as the respective favorite and second-choice. But in the end, the bettors and morning line oddsmaker did not lose sight of Cupid, who despite having just three starts and a maiden win to his credit, was sent to post at odds of 3/1 for trainer Bob Baffert. Baffert. And just like Baffert had done in 5 of the previous 6 years, the Hall of Fame trainer managed to saddle yet another winner perhaps even overshadowing Cupid's impressive gate-to-wire performance. The gray son of Tapit looked to be in trouble in the stretch with Whitmore making a furious rally around the turn, but Cupid found another gear, pulling away for a length and a quarter win. The victory gave Cupid 50 Kentucky Derby qualifying points and marked the improving colt's second win in as many tries in two-turn races.

Check back closer to race day for 2017 Rebel Stakes contenders!