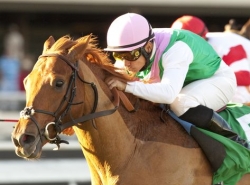 The Hollywood Derby is held towards the end of the year and is one of the final opportunities for three-year-olds to run against age-restricted competition. With a storied history dating back to 1938, the turf race has been contested at both a mile and a quarter and a mile and an eighth at various times. Currently, the race is scheduled to be run at a mile and an eighth and was held at Del Mar for the first time in 2014 after Hollywood Park closed. The race offers Grade 1 status and a purse of $300,000 and will be held as part of the closing weekend card of Del Mar’s Bing Crosby meet.

Over the course of the history of the Hollywood Derby, the race has attracted some of the great champions of the sport. Prior to his triumphant run through the Triple Crown, the legendary Affirmed took to Hollywood Derby in 1978 when the race was still held on dirt in the spring. Recent editions of the race have been run at a mile and a quarter on the turf with the record being held by Showing Up at a time of 1:59.35 from 2006. The mile and an eighth record is held by Super Quercus from the 1999 edition. [+]

The 2014 Hollywood was one of those races that ran true to form, with a odds-on favorite hitting wire first, followed by the 3-1 second choice. When that happens, it's nice to have a betting account through an online racebook like Bovada, where cash back and other bonuses, as well as prop bets and head-to-heads, give a handicapper more options for bigger payouts beyond the tote board.

All eyes were on Om for the running of the 2015 Hollywood Derby, and with good reason, as the Cal-based colt came into the race having captured two consecutive Grade 2 events with relative ease, the first of those over the Del Mar surface. That being the case, others were overlooked, including Florida-bred Chiropractor, who was making a big move forward into his first Grade 1 coming out of the allowance ranks. After an awkward break, the 14-1 shot settled patiently near the back of the 13 horse field, biding his time into the stretch, before getting strong urging to split the front-runners and finish strong to get the win by a head over 12-1 March, with Om settling for third in what was was an exciting duel to the finish.

Check back before race day for the 2016 Hollywood Derby contenders!