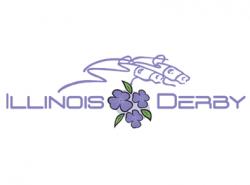 The first winner of the Illinois Derby was In Memorium, who would go on to be named champion American three-year-old that year. The first winner in the modern era was Bold Favorite, who would then go on to finish no worse than third in 10 straight races to finish his career. In 1976 the winner was Life’s Hope, whose trainer, Laz Barrera, would two years later capture the US Triple Crown with Affirmed, the last horse to accomplish that feat. The 1979 winner, Smarten, could be called the king of state championships, as he would also win the Pennsylvania Derby and Ohio Derby that year. [+]

In 2004, the race was won by Pollard’s Vision who was actually blind in his right eye, and had been named after Red Pollard, the jockey of record for the great Seabiscuit. Pollard had also been blind in his right eye, and the year that Red’s Vision won the race was the same year the movie Seabiscuit became a box-office smash. In 1995 Peaks and Valleys would win over the heavily favored Da Hoss, making Julie Krone the first female jockey to win the race. Although US-bred, Peaks and Valleys did most of his racing at Woodbine in Toronto, and that year was named Canadian Horse of the Year.

Perhaps the greatest Illinois Derby champion was War Emblem, who used his 2002 Derby victory as a prep race for a bid at the US Triple Crown. He did manage to win the Kentucky Derby and Preakness Stakes, but stumbled badly coming out of the gate at the Belmont Stakes, rushed up to pass the field and take the lead turning for home, but tired and faded out of contention, losing to 70-1 long-shot Sarava. Despite the loss, his performance that season was enough to earn him US Champion Three-Year-Old Male Horse of the Year honors. Four years later, Sweetnorthernsaint would capture the Illinois Derby before running sixth in the Kentucky Derby and second in the Preakness.

War Emblem’s victory in the Illinois was the last time the race was run at Sportsman’s Park. In 1997 at Sportsman’s, Wild Rush would set the race record at 1:47.51, more than a full second faster than the previous record, which had been set the previous year by Natural Selection. As the race has always been restricted to three-year-olds, no horse has won the race more than once, but two jockeys – Jerry Baily and Kent Desormeaux – have each won it three times. Since 2001, trainer Todd Pletcher has won the Illinois Derby four times.

Although smart handicappers know you can't always count on late-running horses getting to the wire in time, the 2015 Illinois Derby showed sometimes the best run at the back of the pack, as both the first and second-place finishers came from off the pace to grab the win and place money. If you're comeone who likes these Silky Sullivans, or prefers to bet horses who get to the front quickly, there's no question your best bet is making a wager through Bovada, out top-rated online racebook.

Although he was only making his second lifetime start, punters had seen enough of Whiskey Ticket in his maiden win at Santa Anita to make him the second favorite in the 2015 Illinois Derby field, and the Bob Baffert-trained son of Ghostzapper rewarded his backers by finding just enough to hold on for a nose win over the hard-charging Conquest Curlinate. The race seemed to take a lot out of him, however, as he was eighth and last in his next start, the Ohio Derby. For Ontario-bred Conquest Curlinate, the race started a string of three straight runner up finishes, including a hard-fought Queen's Plate Trial.

Check back closer to the race to see who the contenders are for the 2015 Illinois Derby.