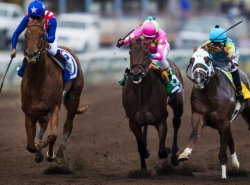 For three-year-olds on the West Coast, the Robert B. Lewis Stakes is an integral part of the road to the Kentucky Derby. Held in February each year at Santa Anita Park in Arcadia, California, the race is a major prep for the $1 million Santa Anita Derby (G1).  Run at a mile and a sixteenth on the dirt main track, the race offers Grade 2 status and a purse of $200,000. In addition, the race is part of the Kentucky Derby points system and offers 10 coveted points to the winner.

The race has undergone several changes since the inaugural running in 1935. It was originally run as the Santa Catalina Handicap and open to horses three-year-olds and upwards with the exception of 1940 when it was run as a juvenile stakes race. In 1964, it began to be a race with Kentucky Derby implications when it became restricted to solely sophomores.  The name of the race was changed in 2007 to honor Robert Lewis, a popular owner who had passed away the previous year. [+]

Over the history of the race, no jockey has been more dominant than the legendary Bill Shoemaker. The Hall of Fame rider won the race seven times throughout his career. He began in 1962 with New Policy and continued with Inverness Drive (1969), Colorado King, Jr (1970), Kinalmeaky (1975), Rumbo (1980), Ferdinand (1986) and Lively One (1988). Ferdinand went on to win the Kentucky Derby that year.

The most recent champion to emerge from the Robert B. Lewis was I’ll Have Another in 2012. Trained by Doug O’Neill, the chestnut colt kicked off his three-year-old year with an authoritative score in the race. He followed that with a victory in the Santa Anita Derby (G1) and parlayed that success into wins in both the Kentucky Derby (G1) and Preakness Stakes (G1) before getting injured and retired days before the Belmont Stakes (G1).

It's a fact of the racing game that sometimes, in small fields with big favorites, handicappers just aren't going to get big payouts through track odds on Win, Place and Show bets. This was evident in the 2015 Robert B. Lewis with the winner Dortmund only paying out $3.20 to Win, and the $1 exacta and trifecta only producing a measly return of $2.30 and $3.90. This is when having a wagering account with a racebook like Bovada is the way to bet, because of the available bonuses and promotions that payback weekly and help to top up those small returns on investment.

The 2016 renewal of the Robert B. Lewis Stakes (G3) attracted a field of six Triple Crown hopefuls and the favorite was Mor Spirit. Mor Spirit, a son of Eskendereya, is one of several contenders that trainer Bob Baffert has as part of his loaded hand this spring and was making his three-year-old debut after winning the Los Alamitos Futurity (G1) as a juvenile.

Under Gary Stevens, Mor Spirit stalked the pace and rated in third off of the front-running I Will Score. He began to inch closer to the top two as they hit the top of the stretch and then gamely edged clear to win by 1 ½ lengths. He has improved his record to three wins from four starts and this was his second consecutive graded stakes win.

Check back closer to the race for the contenders for the 2017 Robert B. Lewis Stakes!