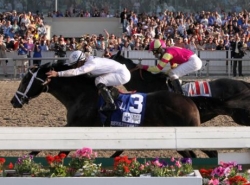 The Louisiana Derby takes places typically during late March at the Fair Grounds Race Course in New Orleans. This race is for thoroughbreds three years of age at a distance of 1 1/8 miles on the dirt track. As a Grade 2 stakes with a generous purse of $1,000,000, the Louisiana Derby is usually the most important race of the season at the Fair Grounds track and one of the biggest perennial sporting events in the state of Louisiana.

In 2015 the Louisiana Derby was run on the same day as the Florida Derby and the UAE Derby, with all three races playing a significant role when it comes to qualifying for the Kentucky Derby. As the second leg of the Kentucky Derby Championship Season, the winner of these races earn 100 points in the standings of the Road to the Kentucky Derby series, with second place earning 40 points, third place collecting 20 points and fourth taking home 10 points. [+]

As one of the longest running thoroughbred races in the United States, the Louisiana Derby was initially called the Crescent City Derby during its first running 1894, before being renamed for the state of Louisiana. At first, this competition was run at a distance of a mile before switching to a 1 1/8 mile race from 1898 to 1988. From 1989 to 2009 the distance was shortened to 1 1/16 miles, before reverting to its current length. In addition to the Fair Grounds, the Louisiana Derby has been held at the Crescent City Race Course between 1894 and 1908 and the Jefferson Park track between 1920 and 1931. Similar to other major New Orleans events canceled due to Hurricane Katrina, the Louisiana Derby was not run in 2006.

This competition has produced a pair of Kentucky Derby winners, with Black Gold winning in 1924 and Grindstone taking home the first leg of the triple crown in 1996. In 1988, Risen Star became the most successful winner of the Louisiana Derby, going on to win both the Belmont Stakes and the Preakness Stakes in 1988. In 1977, Clev Er Terr set the record for this race at a 1 1/8 miles by winning with a time of 1:48.80. The race record for the 1 1/16 mile distance was set by Crypto Star in 1997 with a time of 1:42.60.

After claiming the first two major stakes of the Fair Grounds racing season, it was only natural that International Star went off as the favorite for the 2015 Louisiana Derby, but perhaps a bit of a surprise his odds were 5-2, producing a Win payout of $6.60. With 7-1 Stanford getting up for second, the exacta combination on those two made for a tidy return of $50.40 - plus another 5% cash back if that exacta ticket was bet online through Bovada's racebook.

The Louisiana Derby (G2) drew a solid field for the 2016 renewal and featured several familiar faces from the earlier prep races in Louisiana such as Tom’s Ready, Mo Tom and Gun Runner.

Mo Tom went to the gate as the favorite despite an unlucky third-place finish in the Risen Star Stakes (G2). His string of bad luck persisted, however, and as he was launching a strong bid, he and jockey Corey Lanerie took the inside path and were forced to check sharply. The best they could manage was fourth. Gun Runner, an up and coming colt for Steve Asmussen, earned his second consecutive graded stakes victory with a 4 ½ length win after a tactical stalking trip. The ever-consistent Tom’s Ready, a longshot at odds of 30-1, wound up closing for second despite a difficult trip.

Check back closer to race time for the 2017 Louisiana Derby!