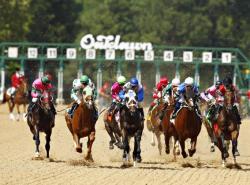 Held continuously every year but one since 1936, the Arkansas Derby is probably one of the most historic, but least well-known, of the classic American thoroughbred horse races. Run at Oaklawn Park in Hot Springs, Arkansas, the race is open to three-year-olds and is run at 1 1/8 miles on the dirt. It is presently classified as a Grade 1 race, and from an original purse of $5,000, it now offers a purse of $1 million. The 2013 race is scheduled to be held on Saturday, April 12.

By sweeping the Rebel Stakes (also held at Oaklawn), the Arkansas Derby and the Kentucky Derby in 2004, Smarty Jones became the first and only horse so far to collect a $5 million bonus offered by Oaklawn Park to any horse that could accomplish the feat. Prior to the bonus being available, Canadian–bred Sunny’s Halo also won all three races.

In addition to those, the 1994 Arkansas Derby winner, Concern, won the Breeders’ Cup World Championships, as did the 2007 winner, the great Curlin. The year following Sunny’s Halo’s victory, the filly Althea would set the current race record time of 1:46.80, before going on to finish a disappointing 19th in the Kentucky Derby. She would only run once more after that before being retired to broodmare duty. In 2012, Bob Baffert’s Bodemeister would win the Arkansas Derby and then run second in both the Kentucky Derby and Preakness Stakes.

As recently as 2010-11, jockey Jon Court won back-to-back Arkansas Derbys, joining Garrett Gomez (1994-95) and Pat Day (1986-87) in accomplishing that feat. Retired Hall of Famer Day holds the record with three wins, taking the trip to the winners’ circle in 1997 as well. Only once in the 76 times the race has been run has the winner been disqualified, that coming in 1999 when Valhol was disqualified after a months-long stewards investigation and the win awarded to Certain.

Arguably the pre-eminent thoroughbred race in the American South, the Arkansas Derby should be circled on every horse racing fan’s calendar as a live destination race or simulcast event.

Even a race with a heavy favorite, there's betting value to be found, because all the money going to one horse means the longshots will be even longer. Finding an upset winner or a nice exacta through an online racebook like Bovada is the key to betting these kinds of races.

Sent off as the heavy favorite, Cupid flashed some brief tactical speed but it became evident early that it was not going to be his day and opened up the door for a longshot. Creator, overlooked at odds of 11-1, made a bold rally from last to first and powered clear to win by 1 ¼ lengths. Suddenbreakingnews closed well for second and the ever-consistent Whitmore rounded out the trifecta. It was announced in the days following the race that Cupid came out of the race with an entrapped epiglottis and would be off the Kentucky Derby trail.

Check back closer to race time for the 2017 Arkansas Derby contenders!