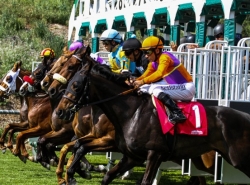 One of the most coveted races in the country for older horses, the Santa Anita Handicap offers a purse of $1 million and Grade 1 status. Run at a mile and a quarter on the main track at the Arcadia oval, the race dates back to the inaugural running in 1935 and boasts some of the biggest names in thoroughbred racing history.  Known as “the Big Cap”, the race is a handicap race in which the horses will carry a varying degree of weight assigned based on accomplishments as a way to even the playing field.

The Santa Anita Handicap was held for the first time in 1935 and immediately became a marquee event. It was the first race in the country to offer a purse of over $100,000 and since then, the purse has grown to $1 million. The lucrative monetary incentive has not been the only appeal of the race. Held in March, the race is an ideal spot for older horses returning off of a winter freshening to return to action and gives fans excitement between the Breeders’ Cup and the Triple Crown. [+]

The most famous horse to win the Big Cap may be the legendary Seabiscuit. After two narrow defeats in the 1937 and 1938 editions, he was injured while preparing for his attempt in the 1939 race which was eventually won by Kayak II who was coincidentally owned and trained by Tom Smith and Charles Howard, the same trainer and owner as Seabiscuit. Against the odds, he returned to close out his career and win the 1940 Santa Anita Handicap..

Though several legendary horses have won multiple editions of the Big Cap such as John Henry in 1981 and 1982, Milwaukee Brew in 2002 and 2003 and Lava Man in 2006 and 2007, only one horse has won the race three times. Game On Dude first made history when he won the 2011 edition and in doing so, Chantal Sutherland became the first female rider to win the Big Cap. He was back to win the 2013 edition and defeated a star-studded field in the 2014 running, breaking the track record and finishing in 1:58.17.

Over the history of the race, there has been no jockey as dominant as the Hall of Fame rider Bill Shoemaker. He won eleven editions of the race spanning from 1954 through 1985, four of which he won for trainer Charlie Whittingham (1967, 1971, 1975 and 1985) who has saddled a record eight winners of the Santa Anita Handicap. The leading owner in Big Cap history is Charles Howard, who sent out Kayak II, Seabiscuit and later Noor.

With an overwhelming favorite like Shared Belief in the field and taking most of the money, the 2015 Santa Anita Handicap set up perfectly for a nice payoffin the exotics. With 9-1 Moreno and 16-1 Catch A Flight filling out the bottom of the ticket, the $2 trifecta paid $76.80 - plus an extra 5% if that bet was made online with Bovada, our top-rated internet wagering partner.

One of the most prestigious races in the first half of the year for older horses, the Santa Anita Handicap (G1) drew a wide-open field of nine for the 2016 renewal. With many of the biggest stars in Dubai for the Dubai World Cup (G1), the “Big Cap” was ripe for an upset.

Effinex, fresh off of a victory in the Clark Handicap (G1), went to post as the favorite. He lost some appeal in the post parade, however, when it became clear he was covered in a breakout of hives. Melatonin, a longshot at odds of 16-1, went to the front end and set the early pace. Donworth, a rising star for Doug O’Neill, was barely controllable by jockey Mario Gutierrez and clipped heels as he was attempting to launch his bid. Melatonin, in a perfect ride by Joe Talamo, made every call a winning one to pull the upset.

Check back closer to the race for the contenders for the 2017 Santa Anita Handicap!