Bet on The Belmont Derby Invitational 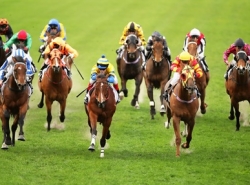 Once known as the Jamaica Handicap, the 2014 version of  the grade 1 race was renamed the Belmont Derby with a purse boost from $500,000 to $1.25 million. That significant change also came with a distance increase from a mile and one eighth to its current distance of a mile and a quarter, thereby attracting many of the top distance three year-old grass horses in the country. In 2014 and 2015, the race was the centerpiece of the July 4 Stars and Stripes card featuring several stakes events at Belmont Park.

Run as a turf race since 1994 and consecutively since the Jamaica's inception in 1929, the race has a rich and diverse history, but was not identified as a grade 1 until 2009. Many past winners of the Jamaica have been notable runners and the Belmont Derby has become a coveted destination as the most lucrative grass race in North America limited to three year-olds. Given the purse increase and elevated profile of the Belmont Derby, the race only figures to expound upon its rich history and continue to attract elite talent from both coasts.

In 2015, a competitive Belmont Derby field assembled led by 2/1 California-shipper Bolo. There was little doubt, however which runner was the best as 10/1 shot Force the Pass tracked the early leaders with interest, skimmed the rail, and left the field in his wake with a quick stretch move to win by 3 1/4-lengths. With Canndal ($11.40 to place and $6.40 to show) running second and Startup Nation ($6.10 to show) completing the order of finish, the trifecta returned a handsome payout, proving the depth and quality of the field as viable choices proved themselves on the track.

The 2016 Belmont Deby has drawn a deep an talented field of 13 with several credible runners and no clear-cut favorite. In what figures to be one of the better turf betting races of the year, handicappers will delight in the myriad of logical candidates to choose from. Deauville and Humphrey Bogart comprise the European contingency with both runners trying to rebound off subpar performances over the pond. Aquaphobia is an interesting domestic runner who enters the race in good form for trainer Arnaud Delacour following a fast-closing second in the James Murphy Stakes on the Preakness undercard and a winning effort in the Stanton Stakes. Beach Patrol ran a disappointing sixth last out in the Penn Mile, but should appreciate extra ground and seeks a return to his prevous form. The rest of the field is loaded with legitimate contenders in the highly anticipated event.