Bet on The Diana Stakes 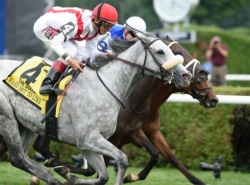 The Diana Stakes has been a Saratoga staple since it was inaugurated in 1939 and has developed into one of the most prestigious turf races in the country for fillies and mares. The race currently holds coveted Grade 1 status and offers a purse of $500,000. It is contested at a mile and an eighth on the Saratoga turf course. The Diana Stakes is part of the Breeders’ Cup Challenge Series and the winner will automatically qualify for a spot in the starting gate in the Breeders’ Cup Filly and Mare Turf (G1).

Throughout the history of the race, the Diana Stakes has routinely attracted some of the top horses in the world and has been won multiple times by champions such as Miss Grillo (1946, 1947), Shuvee (1970, 1971) and Forever Together (2008, 2009). The race is traditionally held as part of Saratoga’s opening weekend.

In 2015, jockey John Velazquez notched his fourth victory in the Diana Stakes (G1) aboard the Christophe Clement-trained Hard Not to Like who pulled off a minor upset over the favored Stephanie’s Kitten.

Hard Not to Like went off at odds of 6-1 and made a furious late charge to prevail by a nose over Tepin at odds of 3-1. Longshot Kitten’s Queen rounded out the trifecta at odds of 27-1 while Stephanie’s Kitten disappointed and finished fifth. With the favorite off the board, the trifecta returned $559 and the superfecta paid $2585. Bovada’s racebook offers 3% win-or-lose rebates on all straight wagers and 5% back on exotics, making those payouts even more enticing.

The field has been set for the 2016 edition of the Diana Stakes (G1) and trainer Chad Brown will saddle four of the ten contenders who will all be trying to defeat Miss Temple City who has risen to be one of the top fillies in a deep division.

Globe-trotting Miss Temple City has been tabbed as the morning line favorite at 3-1 odds for trainer Graham Motion. She was last seen running a respectable fourth at Royal Ascot and prior to that defeated male rivals in the Maker’s 46 Mile Stakes (G1).

Included among Chad Brown’s formidable foursome is Wekeela (FR), the second choice at morning line odds of 7-2. Bred in France, she began her career in her native country and was a Group 3 winner there last year. Since her stateside debut in April at Keeneland, she has had two consecutive second-place finishes against top quality competition.

Here is the field for the 2016 Diana Stakes along with morning line odds.