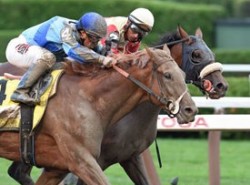 The Jockey Club Gold Cup at Belmont Park is a signature race in the United States and a key Breeder’s Cup Classic prep. Run at the classic distance of a mile and a quarter, the Jockey Club Gold Cup is a Grade 1 race worth $1 million and takes place annually in late September. The race has been run consecutively since 1919 and has been won by some of racing’s all-time greats such as War Admiral, Whirlaway, Princequillo, Citation, Nashua, Kelso, Buckpasser, Affirmed and Curlin.

In addition to being an automatic qualifying race for the Breeder’s Cup Classic, The Jockey Club Gold Cup – in many instances – features three year-old Triple Crown contestants racing against older horses for the first time in their careers. In 2007, for example, Preakness winner Curlin narrowly defeated Whitney and Woodward winner Lawyer Ron in The Jockey Club Gold Cup en route to winning the Breeder’s Cup Classic and Horse of the Year honors. These older versus younger matchups are often met with great anticipation by the racing media and horse racing fans alike as they pit the best of each generation against one another. [+]

Multiple horses have won the Gold Cup more than once, but the legendary Kelso won the race five consecutive times from 1960-1964 when the race was run at a distance of two miles. Skip Away holds the track record at a mile and a quarter stopping the clock in 1:58.89 in 1997. In 1978, Exceller accomplished a feat in the Jockey Club Gold Cup that will almost assuredly never happen again when he beat two Triple Crown winners in the same race. Exceller came from far back to defeat 1977 Triple Crown winner Seattle Slew and 1978 Triple Crown winner Affirmed. No horse has won a Triple Crown since Affirmed. The last horse to win the Breeder’s Cup Classic after winning the Gold Cup was Skip Away in 1997. In 2010, Blame finished a distant second in the Jockey Club Gold Cup before going on to defeat Zenyatta in the Breeder’s Cup Classic.

While Belmont Stakes winner Tonalist was the favorite for the 2014 Jockey Club Gold Cup, the real star of the ashow as far as horseplayers were concerned was Long River, who took third place in the race at odds of 52-1 to put an empahatic bottom line on a $2 trifecta that paid almost $1500! Find long live shots to round out the bottom of your tickets when you place your wagers online through Bovada, our one of our other highly recommended racebook partners.

A short field of six has been entered for the 2016 JC Gold Cup, evenly split between a trio of strong contenders and three other long shots in the morning line odds. Leading the list as the slight 7-5 ML favorite is the ever-competitive Effinex, who was third in this event last year and followed up that effort with a second place run in the 2015 Breeders' Cup Classic. Just behind that one in the ML at 8-5 is the Irish-bred Mubtaahij, who started the campaign racing in Dubai, and who was third in and then second in his last two most recent efforts in graded-stakes events at Belmont and Saratoga, just missing by a head last out in the (G1) Woodward. The last of the top three at 7-2 is Hoppertunity, who has finished just out of the money in his last two in California, and who will be making his Belmont debut after 21 lifetime starts. Of the longer shots, previous graded-stakes winner Protonico (12-1) was away from the track for nine months but made his first start of 2016 a winning one in an allowance event at Belmont in early September.